We missed our crew of eight as soon as they left!  It did give us a chance to reinstate some order in the cabin (to a degree), but we wish they were here.  Peterborough charmed us for another day before we moved on – here are a few more pictures from our last day there:

I’m not much of a shopper, but this marketing strategy did cause me to park my bike and go in for a look in this store… 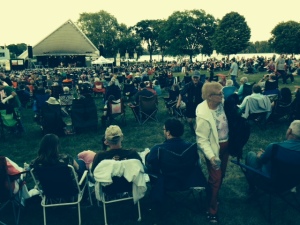 On our way out of Peterborough, we saw what looked like a huge school of fish churning up the water ahead – it turned out to be about 500 swimmers participating in the Peterborough Triathalon at 8:00 AM on Sunday morning – good thing we didn’t cast a line…

Sunday we arrived at Young’s Point late in the afternoon, as the Peterborough Lift Lock was closed for repairs until noon.  Sometimes a Chance Encounter has surprising results. While we were fueling up at the dock, a grandfather with his son and two grandkids in tow (ages 3 & 4) asked if the kids could look inside the boat. After we were done fueling, we hoisted them aboard and gave the whole group a tour.  Later that evening, we happened to sit a few tables from them in the restaurant overlooking the dock.  Before we knew it, an order of bruschetta arrived, compliments of the grandfather. We finished dinner and were preparing to leave when a bottle of wine arrived, also compliments of the grandfather – not that we needed to drink another bottle of wine at that point, but what could we do?

The weather Monday was cloudy with rain predicted, but we decided to head to Bobcaygeon about 35 miles and three locks away.  Although the weather was cloudy and breezy and we did get some rain, the scenery was spectacular, with rock outcroppings, islands, and picturesque cottages galore. Here are some pictures from Monday & Tuesday’s runs:

Now that the Bill Burke aka “Mariner of the Year” has left us, his understudies Pat & Trish had to step up and carry on without him

Sometimes the sun just doesn’t cooperate and the rain comes…but as my daughter Jenny says, it’s only water

The Kawartha Lakes section of the Trent Severn Waterway is spectacularly beautiful, but the helmsman had better pay attention – there are rock outcroppings everywhere both above and below the surface. However, the channel is well marked.

These folks take the boating lifestyle to a new level – this church is on a small island in Stoney Lake, accessible only by boat. I wonder how well-attended the service is on a rainy Sunday morning 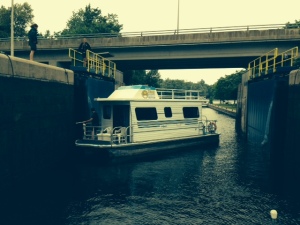 Rented houseboats abound on this section of the Waterway due to the abundance of lakes and the incredible scenery. This one had a bit of a challenge maneuvering in the lock

Speaking of houseboats, if you are looking for a unique, relaxing, and spectacular vacation, consider renting a houseboat in this section of the Trent Severn Waterway which features calm and protected waters, many marinas and villages in which to dock and explore, great swimming and fishing, well-marked channels, and incredible scenery. They are easy to operate and the rental companies will provide on-water lessons on driving the boat if you need them.  Two local companies that rent them are Happy Days House Boats (www.happydayshouseboats.com – 705 738 2201) or Egan Houseboat Rentals (www.houseboat.on.ca – 800 720 3426).

We stayed in Bobcaygeon Monday & Tuesday nights. Bobcaygeon is a pleasant town with many interesting shops, including world-renowned Bigley Shoes & Clothing, which includes a mind-boggling selection of shoes. Bobcaygeon is also home to the Kawartha Settlers’ Village with 22 historic homes and buildings on 8 acres depicting life in the Kawartha region from 1830 to 1935, and the nearby Horseless Carriage Museum depicting early transportation and mechanical antiquities, including an 1890’s General Store.

As I mentioned in a previous blog, the Trent Severn Waterway was not built in response to a military need or a master plan, but resulted from the eventual linking of individual locks and sections over a period of 90 years.  The first lock to be constructed was in Bobcaygeon as a result of a government grant in 1833 (I guess there were earmarks even back then). It was made of wood and was intended to speed transportation between Sturgeon and Pigeon Lakes, and was to have a lift of 10 feet. However, when it was completed and the water let in, it was a disaster – it had been built on porous rock, so the water entering the upper level literally disappeared into the ground before reaching the lock. In addition, it was built at the wrong elevation, so there would have been insufficient depth even if the water hadn’t disappeared (sounds like a big Change Order in the making…).  After two years and the expenditure of a lot more money ( sound familiar?), the lock was finally opened in 1838. However, because it was still at the wrong elevation, the depth was not adequate nor was the lock long enough for the only large vessel on the lake at that time – therefore, it could be used only for small boats and logs. A new, usable lock was finally built in Bobcaygeon in 1857. Thus began the checkered history of the construction of the Trent Severn Waterway, today a unique gem that is a boaters dream.

Sometimes things just don’t go as planned, even when those plans were made weeks ago. On Wednesday, the weather was cold, cloudy, and windy, but we wanted to get to Fenelon Falls where we had made arrangements with a marina to leave the boat through next Tuesday. The marina was on Cameron Lake, so I was concerned about it being exposed to the weather – however, I was assured by the owner that there was a breakwater to provide protection.  We arrived in a stiff wind blowing across the entire length of the lake, directly into the marina – no breakwater.  After some scrambling, we found a place on a river about 4 miles away at the other end of the lake that could take the boat thru next Tuesday – so that’s what we did. Anyway, there were some interesting houses along the way – here are a couple of pictures: 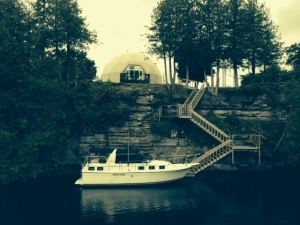 A family compound making full use of the island

So back to Chance Encounters – this has to be the granddaddy of all Chance Encounters.  We’ve had a nagging but s0 far manageable problem with our shifting mechanism on the starboard (right side) engine since we bought the boat a year and a half ago. We thought we had it solved three different times, but after a while it recurs, and recently started to occur again, with increasing frequency. I decided that, whatever it took, I had to get it fixed once and for all. It’s a design and configuration that is somewhat unique to this model of boat (a PDQ), so we couldn’t find anyone who was familiar with or had experience with this system. Then, while we were in Campbellford, a gentleman on a sailboat (Michael) immediately recognized the boat as a PDQ and approached me to chat about the boat. He told me that his brother-in-law (James) had worked at the factory that built PDQ’s (they went out of business in 2007 after building 114 of them) and suggested I contact him to learn more about the boat. So I did.  The Joint Adventure is PDQ hull #10 (the 10th boat built).  It turns out that James (1) worked on the construction of many of the PDQ’s that were built, including hull #10 (2) commissioned hull #10 (3) performed warranty work on hull #10, and (4) is the only person from the original factory that routinely performs work on PDQ’s. He lives not far from Bobcaygeon so agreed to drive down and look at the shifting mechanism. Within 10 minutes he had diagnosed the problem, and 30 minutes later had it fixed – this is a problem that three different very good mechanics over the past year and a half had been unable to permanently fix. What are the odds that I would happen to run into the brother-in-law of the guy that helped build and commissioned this exact boat, and that would know exactly how to diagnose and fix the problem within minutes?

One last image – I really wanted to watch the Brazil-Germany World Cup semi-final, but the nearest pub with a TV was a quarter mile away and it was absolutely pouring rain and would not let up – so I decided to ride my bike through the rain. Pat snapped this picture as I was about to leave the boat and made me agree to put it in the blog.  Of course, the rain stopped 10 minutes after I got to the pub.

No, it’d not a creature from outer space….