One year ago today, we cast off the lines in Boston to begin our adventure around the Great Loop. In my first blog post, I wrote:

“I just looked up ‘adventure’ in Webster’s Dictionary – it defines ‘adventure’ as ‘an unusual and exciting, typically hazardous, experience or activity’.  YIKES!  One on my goals is for this adventure NOT to be hazardous!  Another goal is that it not be TOO exciting.  But it certainly will be interesting, and it certainly will stretch the envelope and be challenging.”

So as I look back on the past year, the journey certainly has met those expectations and more – although at times there was a bit more “excitement” than I may have wished for! But here we are a year later, just five or six weeks from returning home with a wealth of new experiences.

So back to the present – before Jake & Elissa left the boat in Charleston, they gave me a “survival” kit to help me carry on: 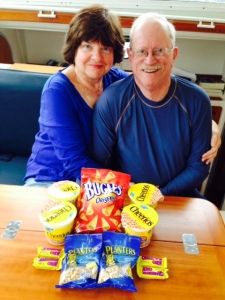 Cheerios, Bugles, cashews, and Charleston Chews – what more could anyone need?

I hated to see them leave, but I was happy to have Tom Thurston join me for the next week. Our first day was a nearly 70 mile run to Georgetown, South Carolina. Some pictures from the ICW: 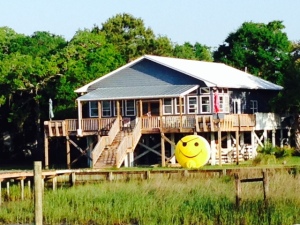 An isolated home set in the marsh along the ICW

This is a “floating swing bridge” – the only such bridge we’ve encountered on the entire trip. It remains tied parallel to the river as shown here when not being utilized. 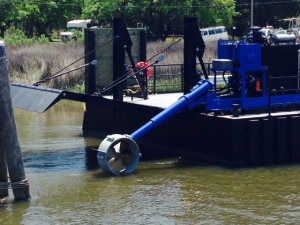 This “bow thruster” (propeller) is attached to one end of the swing bridge. To put it in place so vehicles can cross, the “floating bridge” is untied, then the propeller is lowered into the water and activated, swinging the moveable end of the bridge into the river.

Our next stop, Georgetown, is the third oldest city in South Carolina, having been founded in 1732. Indigo was the first cash crop in Georgetown, and brought great wealth to plantation owners until the Revolutionary War cut off the indigo market with England. Rice then replaced indigo, which required huge quantities of slave labor – before long, 85% of the population of Georgetown County were slaves. After the Civil War, lumber replaced rice as Georgetown’s principal product, and by 1913, Georgetown was home to the largest lumber mill on the East Coast. In 1936, International Paper built a paper mill in Georgetown, and in the late 1960’s, a steel mil was built. Both mills are still in operation, providing jobs and helping to drive the local economy.

Georgetown today is a pleasant working town with many historical buildings and a new boardwalk along the riverfront with several restaurants with outdoor seating. Here are some images: 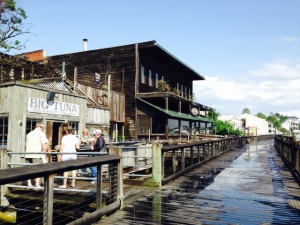 The riverfront boardwalk in Georgetown 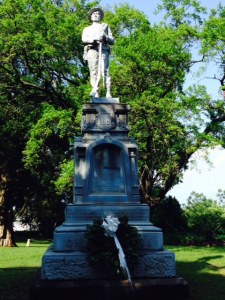 This is a monument in the cemetery in Georgetown, honoring Confederate soldiers. 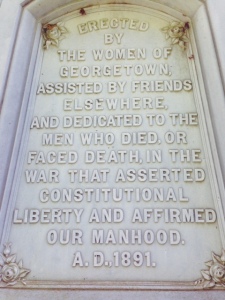 This is the inscription on the Confederate monument shown above. I thought the message to be unusual and unlike anything else I had seen in the South. 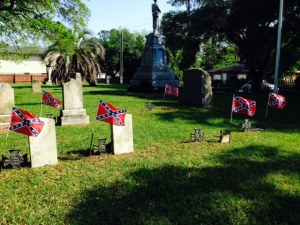 I just commented in my last post that I had seen no Confederate flags in South Carolina – this picture is from the same cemetery as the monument shown above….

Our next stop was Myrtle Beach, South Carolina, after a 50 mile run. Much like Hilton Head, Myrtle Beach is about beaches and golf. Here are a few pictures from our stay in Myrtle Beach:

This tram carries golfers over the Intracoastal Waterway from one side of a golf course to the other – look closely and you can see the golf bags hooked to the side of each gondola.

The beach at Myrtle Beach – too cold for me to swim!

An indication that we’ve entered a different climatic zone…. 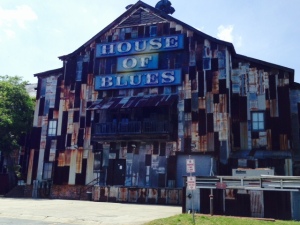 The House of Blues in Myrtle Beach –

The Alabama Theater in Myrtle Beach. A live musical revue/dance/comedy show was being performed the night we were in Myrtle Beach, so I bought a ticket and went – the show was terrific and the person who performed the comedy routine was so good that I bought a CD. His name is Ricky Mokel in case you hear of a performance by him. He does shows on TV as well.

So the ICW in Florida runs inside a series of barrier islands, essentially parallel to the mainland. The shoreline is dominated by sand beaches along nearly all of the Florida coastline. Sand is everywhere.  In Georgia and South Carolina, however, known as the Low Country, it changes dramatically. The barrier islands disappear, and the coastline is dominated by marshes.  Sand disappears as well, replaced by mud built up by decaying plant material over countless eons. The ICW changes from a linear waterway following the coastline to a meandering pathway that utilizes rivers, creeks, estuaries, and man-made cuts to form a contiguous but zig-zag waterway through the marshes. Though the overall direction is northerly, the route wanders through nearly every point on the compass. However, once you approach the North Carolina border, the world changes yet again. The Low Country marshes disappear, replaced once again by sand and barrier islands. Instead of marshes, the ICW is bordered by cypress swamps and sand dunes. But that isn’t all that is different – the climate has changed as well. Long pants and sweatshirts have re-appeared, and shorts are confined to a few hours in the afternoon, if at all. The “high season” was ending in Florida, while it is just ready to begin here in North Carolina. We are indeed moving north.

Here are some images of the ICW as we head into this new and changing environment: 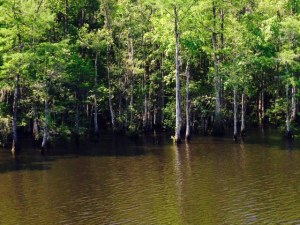 Cypress trees along the ICW as we enter North Carolina 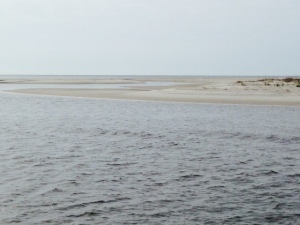 Looking east toward from the ICW, beach houses line the ocean beaches

Tom Thurston piloting the Joint Adventure up the ICW

There are numerous drawbridges along the ICW, especially in Florida. Our “air draft” (height above the water level) is about 18′ with our antenna down – we can reduce our height to just under 16′ by lowering the radar tower, which we did several times in the northern canals & rivers, and we can further reduce our height to 11 1/2′ by taking the bimini down. We can get under most drawbridges without an opening since we left Florida, but this one was just too close. It opens only once every hour, so we tied to the dock at a nearby marina while we waited about 20 minutes for an opening at the top of the hour.

Another milestone!  We crossed into our next state – North Carolina – and stopped at Carolina Beach after about a 60 mile run. Carolina Beach is an older beach community with a new, extensive wood boardwalk – the beach area reminds me somewhat of Hull in Massachusetts. Here are a few pictures: 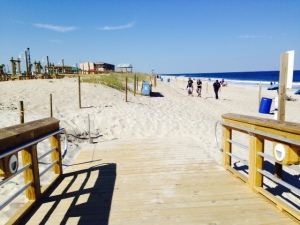 The beach as seen from the new boardwalk –

This guy was looking for a handout at the beach, I think –

Every stop can’t be a resort – our stop at Sneads Ferry, North Carolina was anything but – a bit rustic, as they say, sort of in the middle of nowhere. But it was in a location that broke up an otherwise long stretch, so we pulled in, as planned. However, there is a restaurant three miles away that was willing to pick us up at the marina, then drive us back after dinner.  So off we went. The person who picked us up, a warm, twenty-something man named Andrew, is the grandson of the man who opened the restaurant in 1947 – the third generation in a family-owned business. One thing I’ve learned on this trip – the best restaurants are usually not the chic, urban establishments, but the small, out-of-the-way, rural, family owned restaurants where mostly locals who know good food and good value go for meals. Places like Mudcat Charlie’s, as described in a previous blog update. And the Riverview Café in Sneads Ferry might be the best of them all. On the way to the restaurant, I asked Andrew what his best, freshest fish was. He said his favorite was fried sea mullet (sea mullet?) – they just brought some in today, fresh caught. I told him I can’t eat much fried food, could they grill it?  Sure, they can grill it, he said. When my meal arrived, there were three big fillets, plus the “backbone” (the part of the fish that’s left after they fillet it). Perhaps the best fish I’ve ever had. I learned when Andrew drove us back to the marina that, despite the fact that Andrew isn’t the cook, he went into the kitchen and grilled it himself, the way he likes it cooked. The entire dinner, including two sides, was $9.95. He told us on our ride back to the boat that he buys the sea mullet for $1.50/pound, because it’s an “undiscovered” local fish. Great meal – but no great meal is complete without desert. All homemade pies, made fresh every day. I couldn’t decide between peanut butter pie and coconut pie, so I had slice of peanut butter pie for desert and got a coconut pie to go.

So – my theory of restaurants – look for the out-of-the-way, rural places where only the locals go – that’s where the real gems are.

Here are a couple of pictures from Sneads Ferry: 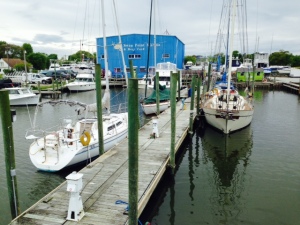 Swan Point Marina – this is all there is –

Sneads Ferry turns out to be home to a Coat Guard Training Center – the guns on the front of these boats are real machine guns with real bullets….I asked permission before I took this picture….

Andrew, manager of the Riverview Restaurant – he buys all the seafood for the restaurant, and he knows his business!

On Thursday, we cast off the lines in a light drizzle, expecting to avoid predicted heavy rain in the area. We succeeded until we were about an hour from Beaufort, N.C., when the skies opened up. The pouring rain ended just before we reached Beaufort, however, so we stayed dry while we docked.

Beaufort is a small, historic town with many homes and commercial buildings built in the 1800’s along the waterfront and throughout the historic district. The town has many restaurants, pubs, boutiques, and shops. It also sits adjacent to Cape Lookout, at the southern end of the extensive barrier island system off the coast of North Carolina that includes Cape Hatteras and Kitty Hawk. Across the channel from Beaufort itself is Shackleford Banks, one of the few places in the Eastern United States that is home to herds of wild horses. The horses have Spanish ancestry, and their origins are believed to date back to colonial times. You can take tours to view the wild horses on the island.

Here are a few pictures from our stay in Beaufort:

The General Store along the Beaufort waterfront

This “capsule” is on display in the interesting Maritime Museum in Beaufort. It was used to rescue stranded passengers and crewmembers from shipwrecks along the Cape Lookout/Cape Hatteras shoals. A cannon would shoot a line from the beach to a wrecked ship, then the capsule would be pulled out to the ship. Up to 11 people would climb into the capsule, in a lying position. The capsule would then be sealed, the occupants essentially immobile and in complete darkness. The capsule would then be pulled through the breaking waves and wild surf, being violently tossed and rolled on its way to shore – what a harrowing experience that must have been, sealed in that container!

An ancient cemetery in Beaufort containing the remains of soldiers from both the Revolutionary and Civil Wars.

Along the way, I sometimes see signs or placards or T-shirts with clever or humorous messages that make me chuckle.  Here are a few that I’ve seen here or there over the past couple of months might make you chuckle as well: 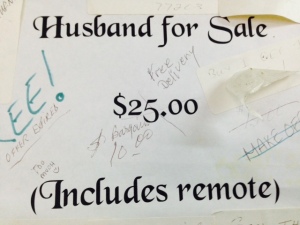 So today (Saturday), my good friend Jack Kelly joins us for our run to Norfolk. More to come!