The week started on an exciting note last Saturday, as we left the Hull Marina, crossed the Ottawa River and entered the set of 8 flight locks that are the entrance to the Rideau Canal. In the early days of canal construction, the technology did not allow for high lifts (such as the 7 story lift in the Carillon Lock on the Ottawa River, which was constructed much later). The need to lift boats significant heights was accomplished with flight locks, which are a series of locks in a row in which you enter the chamber of the next lock directly upon leaving the previous lock. Since the land rises sharply from the banks of the Ottawa River in Ottawa (which is built on a hill), it was necessary to build a series of 8 flight locks just to get to the elevation of the city.  The average lift for each lock is less than 10 feet.
Completed in 1832, the 140-mile long Rideau Canal connects a series of lakes and rivers via a series of canals and 44 locks, following a route between the Ottawa River and Lake Ontario that was used for centuries by native Americans (or in this case Native Canadians) well before Samuel de Champlain traced the route in 1615. The other canals we’ve transited so far were all built for economic reasons – to provide a cheaper and faster way to move people and goods via water before railroads came along and provided an even cheaper and faster method. The Rideau Canal, however, was built not for economic reasons but for military reasons. Britain was still smarting over losing two wars to the upstart Americans – the Revolutionary War and the War of 1812 – and were fearful that another war would break out which would jeapordise Britain’s ownership of Canada. At the time, Britain used Lake Ontario and the St. Lawrence River to move supplies and troops to Quebec, but were fearful that the Americans could close that route in the event of a war, isolating Quebec. Therefore, they decided to construct an alternate water route from Lake Ontario to the Ottawa River, thus enabling them to bypass the St. Lawrence to supply Quebec. Ironically, it was never used for military purposes but immediately became an economic success from the movement of goods. Today, the Rideau Canal is a World Heritage Site (along with such places as the Pyramids, Stonehenge, etc.). In the winter, it freezes and becomes the world’s longest skating rink – 9 kilometers long.
In any case, we had a fascinating run up the flight locks that are now over 180 years old and still hand operated. Since the locks go right through downtown, sometimes thousands of people gather to watch boats transit the 8 locks, which takes about 2 hours to do. Here are a few pictures: 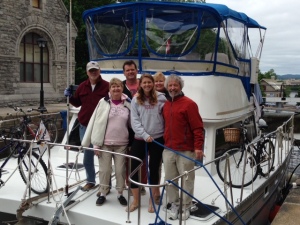 The crew for the trip from Montreal to Ottawa waiting for the last lock to open as we enter Ottawa – from left to right, Tom, Mary M, Ted, Kathleen, Mary R, and Jim K

The week has been spent in Ottawa enjoying this wonderful city and seeing the sights.  English is clearly dominant here, although many people are bilingual.  A two minute ride across one of the bridges reverses the culture, where French is clearly dominant.  In 1857, Queen Victoria was required to choose the city which would be the capital of Canada.  Kingston, Toronto, Montreal, and Quebec City were the front-runners – Ottawa was thought not even to be under consideration, since at that time it was a ramshackle lumber town in the middle of nowhere.  However, with amazing foresight, Queen Victoria chose Ottawa because it was on the confluence of the French and English cultures, which would have to work together if Canada was to survive.  Ottawa was so remote at the time that, upon hearing of Victoria’s decision, the Governor General of Canada wrote glumly of his “exile to the wilderness”.  Today, I’m told there are two seasons in Ottawa – construction season and hockey season.

The magnificent Parliament Building is a highlight of the City.  Here are some pictures:

View of the Ottawa River from the observation deck in the Parliament Building. The French-speaking city of Hull, Quebec, is on the far side of the river (on the left in the photograph)

The House of Lords chamber in the Parliament Building. The color green is dominant. The Senate has a similar chamber, where the color red is dominant

Incidentally, in Canada, Senators are not elected – they are appointed by the Prime Minister and serve until they choose to resign or they turn age 75, whichever comes first.  What would the US Congress look like if the President appointed Senators essentially for life instead of the people of each state electing them?

Another highlight in Ottawa is the marketplace district, which includes extensive open air markets that sell a wide variety of products including fresh produce, pedestrian malls closed to traffic, restaurants galore with outdoor seating that spills onto the streets, street performers, watering holes, etc., etc.  It is alive with people every day and night of the week – perhaps it is best described as a combination of Boston’s Haymarket Square and Fanuiel Hall Marketplace times four.

A few pictures taken in Ottawa:

One of the more interesting street performers in the Marketplace District 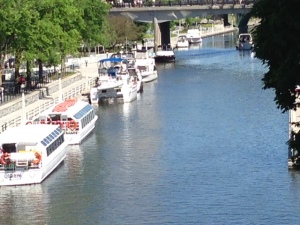 The Joint Adventure tied to the canal wall in downtown Ottawa, next to the Westin Hotel. The dockage is free with electricity available for $10/day.

This will freak you out if you are afraid of spiders – a two story high spider in the plaza of the National Gallery of Canada. The magnificent building is in the background – the building itself is worth the $10 admission. I’m not an expert in art by any means, but found it extraordinary 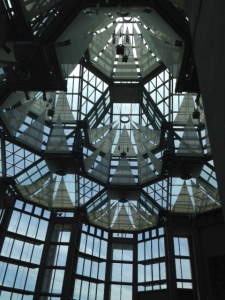 The atrium of the Gallery of Canada in downtown Ottawa

In case of a mutiny, this is my back-up crew – at least they won’t talk back

For you bikers, Ottawa is a very bike-friendly place with bikes everywhere. Here is the best design for an urban bike lane – parked cars are moved away from the sidewalk and a second curb is put in to delineate a fully-protected bike lane and keep parked cars out of the bike lane 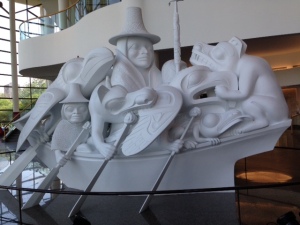 My lifeboat crew – practicing their rowing… 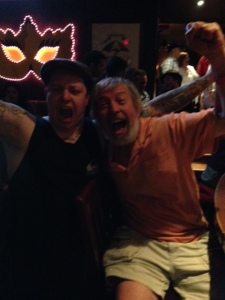 Celebrating the defeat of the NY Rangers in the Stanley Cup final with my new buddy at a Marketplace bar near the end of the second overtime at 12:30 AM – WAY past my bedtime

So you may recall the contest we had to come up with a creative caption for the bent boat hook picture.  We received many great suggestions, most of which are listed in a previous blog post.  Below is the picture along with the winner and the runner-up: 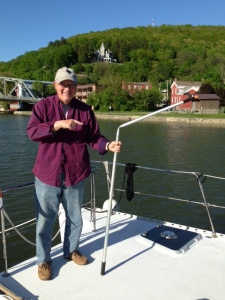 The winner: Seriously, Jim, this is exactly how you gave it to me
The runner-up: That’s for using the hook around a corner

So – what does the title “Women Are Persons….” have to do with anything?  Well, when Canada was formed in 1867, the Act that created Parliament stipulated that only “qualified persons” were eligible to serve in the Senate.  Five governments in a row determined that women were not “persons”, and therefore not eligible to serve in the Senate. In 1927, a group of women activists challenged the determination in court. In 1928, the Supreme Court ruled that women were not eligible because they were not “persons”.  The women activists appealed the Supreme Court decision, and in 1929, the highest court in Canada ruled that women, in fact, are persons after all.  I’m not sure what kind of research they might have done.  The court went on to say   “the exclusion of women from all public offices is a relic of days more barbarous than ours, but it must be remembered that the necessity of the times often forced on man customs which in later years were not necessary.” I’m not commenting.

Here are some pictures of a sculpture on Parliament Hill marking the occasion of this ground-breaking revelation:

The plaque that the woman in the sculpture is holding up, which is the front page of a newspaper when the ruling was announced

The other two women in the sculpture

So – are women persons in the United States?  Canada cleared up this question in 1929, but I’m not aware of any similar determination by a court in the U.S.  Does anyone have any thoughts on this subject that they could share?

Tomorrow morning we head south on the Rideau Canal towards Lake Ontario.

5 thoughts on “WOMEN ARE PERSONS….”