Down the Rideau Canal we go, heading south toward Kingston, Ontario, which is located on Lake Ontario at the point where it transitions into the St. Lawrence River. The Rideau Canal is an engineering wonder for its time. Colonel By was tasked in 1826 with building a waterway connection from Lake Ontario to the Ottawa River to create a military supply route as an alternative to the St. Lawrence River, a distance of 126 miles through total wilderness. He employed 6,000 workers (of which 500 died) and built 47 locks and 74 dams in just six short Canada construction seasons, opening the canal in 1832. The canal lifts boats a total of 28 stories above the level of the Ottawa River to the high point, then lowers them 16 stories to the level of Lake Ontario. Two years into the construction, Colonel By decided that steamboats were the future, so he decided to redesign the canal with larger locks to accommodate steamboats, even though it meant rebuilding several locks that had already been completed (can you imagine the Change Orders that generated?). It was the largest and most expensive project at that time in the entire British Empire, which stretched around the entire world. Upon completion in record time way ahead of schedule, Colonel By was summoned back to England – for a commendation, he expected. Instead he was hauled before a panel to face a government inquiry into why it cost so much (some things never change…) and an investigation regarding the use of funds. He was acquitted of all allegations, but died 4 years later a distraught and disappointed man. However, his legacy lives on, as the Canal was an enormous economic success and has been in continuous operation since 1832.

Our run down the canal has been fascinating. All the locks are manually operated, and the canal links lakes and rivers to form a continuous waterway. Here are some pictures taken along the route: 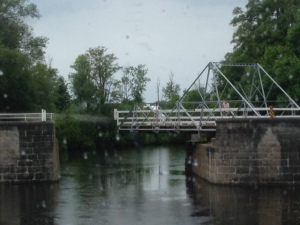 The Canal is often quite narrow and has depths as low as 4 1/2 feet. This is a swing bridge in the process of opening for us with a narrow passage that left only a few feet between concrete abutments on either side of the boat as we passed 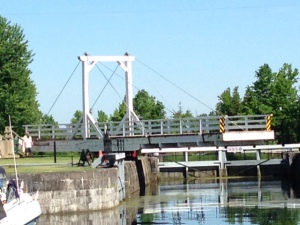 This is a swing bridge located at one of the locks – after manually opening the gates to the lock, the lockmaster and his assistant literally push one end of the bridge sideways to swing it open, then push it on the opposite side to close it after we pass. 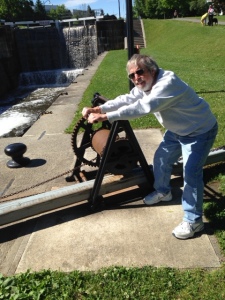 Fuel is expensive in Canada, so I decided to earn some extra money working the locks 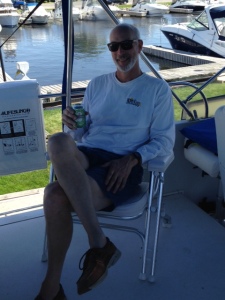 One of our favorite stops was in Merrickville, where we tied to a seawall in the downtown area for the afternoon and overnight.  Merrickville was settled in large part by British loyalists from the American colonies who fled in 1783 when the colonies won the Revolutionary War, fearing reprisals for their loyalty to Britain.  Adjacent to the lock in downtown Merrickville is a fortified masonry Blockhouse, which was built to protect the lockstation from a feared invasion by the Americans.  It has been fully restored and houses an interesting Rideau Canal museum. Merrickville grew in colonial days into a significant industrial center, utilizing water power from the strong rapids on the Rideau River to power sawmills, grist mills, and other factories.  Remnants of some of the old mills are still standing and can be explored. Fronting Main Street is a collection of historic buildings with architecture from the 1800’s, now housing restaurants, a collection of interesting shops, and other businesses. Here are some pictures: 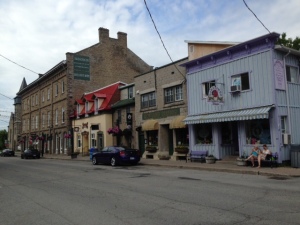 A section of Main Street in Merrickville 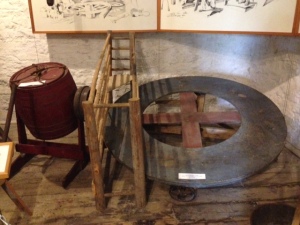 An interesting exhibit in the Blockhouse Museum – everyone had to pull his own weight in the old days, including Fido – this is a dog-powered butter churn. The dog was put in the cage on the left side of the wheel. As the dog walked forward (enticed by some food, perhaps?), the dog turned the wheel upon which it was standing, which in turn operated the churn on the left, connected by a pulley to the wheel. Where was the SPCA? 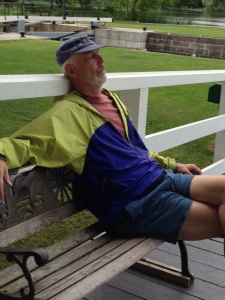 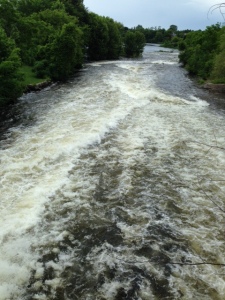 The rapids at Merrickville next to where we were docked – we thought about running them, but decided to use the locks instead…. 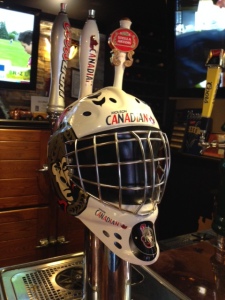 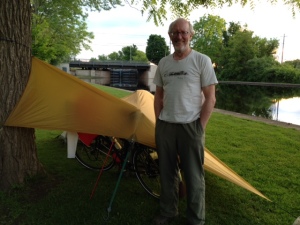 A wonderful system of bike paths parallels much of the Rideau Canal and connects to other bike paths. One of the great experiences of a trip like this is the people one meets. This is John, a biker doing a week-long trip who was camping in the park area adjacent to the lock in Merrickville. One can camp at many of the locks, many of which have park areas, picnic tables, and rest rooms

Our next stop was Smith Falls, a larger and more commercial town than Merrickville.  There are three museums in town – the Railway Museum, the Heritage Museum, and a History Museum.  Again, we tied up to the seawall in the middle of downtown and walked or biked everywhere, including a pub in town where we watched the Russia/Korea World Cup game.  A few pictures from Smith Falls: 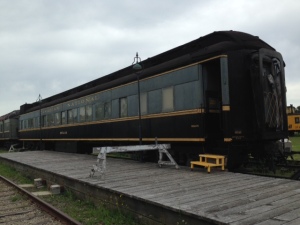 This is the Dentist Car at the Railway Museum. It would go from town to town in northern Canada bringing dental care to remote villages where none existed in the 20’s and 30’s. The dentist and his family lived in the car for several years at a time, which was moved from town to town by freight trains when needed 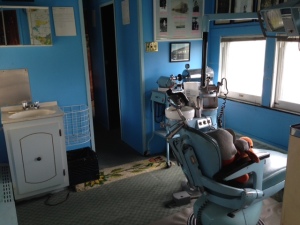 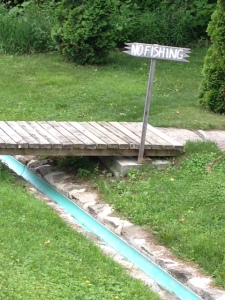 Shucks – and we brought all our fishing gear…. 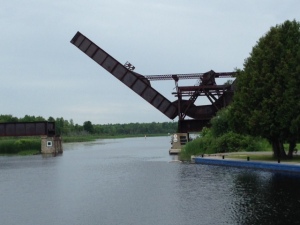 This old RR bridge as we exited the locks at Smith Falls has been in the open position since 1973. It was an engineering feat when built, perfectly balanced throughout the entire opening sequence so it required only a 1/4 HP motor to open or close it. It is now privately owned by a contractor who excavated all the fill leading up to the bridge and has no further use for it, so the bridge can be bought for $1

We are now in Westport, a small resort village on the northeast tip of Upper Rideau Lake, a side trip of about 5 miles. It is a remote area, and the town is small but quite pleasant with many shops that must be busy at the height of the tourist season. We went to the “rack & tunes” night at the local restaurant/pub, featuring ribs and fries for $10 with live music. 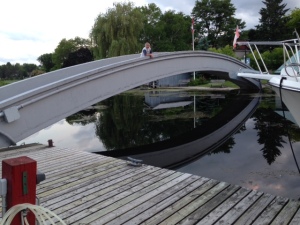 On to Kingston, which we expect to reach over the weekend and spend several days sightseeing. Trish & Pat will join us by mid-week, then we’ll head west on Lake Ontario to the entrance to the Trent Severn Waterway.

3 thoughts on “DOWN THE RIDEAU”