Three more days running south on the Rideau Canal have brought us to Kingston, Ontario – located on the northeast corner of Lake Ontario, where the lake transitions into the St. Lawrence River. The term Rideau Canal is often used for the entire waterway from Ottawa to Kingston, but it is a bit of a misnomer – heading south from Ottawa (as we did), the first part of the canal runs up the Rideau River, with canals and locks bypassing parts that are not navigable. A series of beautiful lakes (some created by dams when the system was built in 1832) are then connected by narrow cuts, locks, and short sections of canals. The southern part of the waterway that we just completed then follows the Cataraqui River, again with canals and locks bypassing parts that are not navigable. However, following convention, I’ll continue to refer to the entire waterway as the Rideau Canal.

The southern part of the Canal has fewer and smaller towns than the northern part.  Our next stop was Jones Falls, one of the prettiest rural lock areas on the Canal. Consisting of a series of 4 locks in series and basins above, between, and below the locks, there are multiple places to tie up for the night.  There is no town or village nearby, but fronting on the lower basin is a wonderful inn/restaurant called the Hotel Kenney – it contains a quaint and beautiful bar area, an upscale restaurant, lodging, and a wrap-around sun porch along the entire frontage. Here are some pictures: 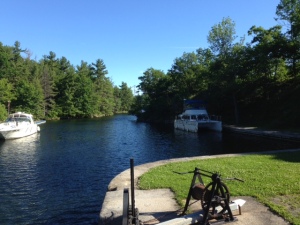 Tied to the seawall in the upper basin at Jones Falls – here we met Steve & Karen, a wonderful couple whom we cruised with for the next couple of days

Hotel Kenney overlooking the lower basin at Jones Falls. The boat on the left is tied to the seawall awaiting passage the next morning through the 4 locks at Jones Falls

At Jones Falls is a fascinating dam built in 1831 by Colonel By (here goes the engineer in me again…).  No, this is really cool.  At the time, it was the tallest dam in North America and the third largest in the entire world – built in utter wilderness virtually by hand.  The enormous stone blocks were quarried and cut 6 miles away and hauled by oxen one by one over a road they had to build before they could even start the dam.  It is 6 stories high and was built in a horizontal arch (as you’ll see in the picture below) – the first of its type in North America.  Because the river roared through the gully where the dam had to be built, they first built a smaller 20′ high wooden dam with a sluiceway (bypass) to divert the water, then built the lower 20′ of the stone dam.  They then had to repeat the process of first building a 20′ wooden dam with a sluiceway on top of the partially-built stone dam twice more until they reached the required height of the dam.  The dam then flooded the land upstream, creating a large navigable lake where raging rapids formerly stood. Here are a couple pictures:

The 6 story high dam at Jones Falls, built entirely of enormous stone blocks hauled by oxen one at a time from a quarry 6 miles away

A power generator was added next to the dam in the 1940’s – these are the pipes running from the lake at the top to the generator at the bottom. The pipes are made of wood (like a long barrel that a cooper would make in colonial times) and are still in use – however, there are numerous small leaks which they continue to try to patch by various means

The run along this section of the Rideau Canal is rural and beautiful, made up of a series of lakes connected by narrow cuts and, at the southern end, the Cataraqui River. Some area are wilderness and others are dotted with cottages ranging from one room bungalows to large homes.  The lakes tend to be deep and the cuts narrow and sometimes shallow.  Here are some pictures of this part of the Rideau: 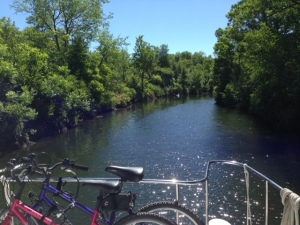 A narrow cut along the Rideau Canal

Another narrow cut – the Joint Adventure is 17′ wide, so these areas had our complete focus – the sides and bottom in this area is all rock – OUCH!!

This is a one-car, self operated ferry across one of the cuts. You drive your car onto the ferry, then use a hand crank on the ferry that is connected to a chain that runs along the bottom from one side to the other. As you crank, the chain pulls you to the other side, where you tie up the ferry. There is also a crank on either shore to pull the ferry back if it is on the other side when you arrive 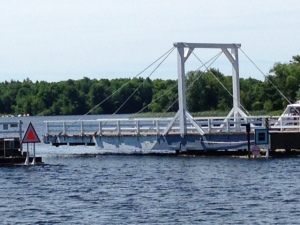 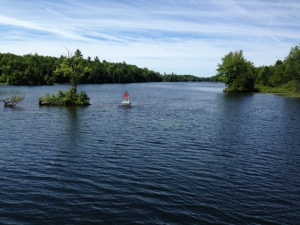 Entering one of the lakes on the lower Rideau Canal

A boathouse on one of the lakes in the Rideau 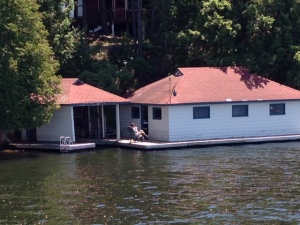 A cottage on the Rideau – notice the guy on the deck imitating Paul….

Another cottage on the Rideau

Some cottages are more modest than others… 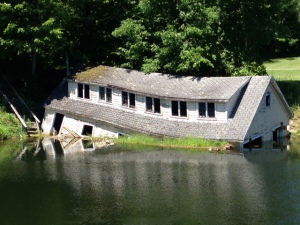 Some of the cottages need some tender loving care – Doug, looks like an investment opportunity for you….

On our last night before reaching Kingston, we tied up at the lower basin of the three locks at Brewers (Upper & Lower). It was an idyllic setting with a waterfalls, the historic locks, a wooden swing bridge, and fast-moving current from the falls that made it a great fishing spot – we were joined often by local fisherman catching pike and bass. We tied up next to our new friends Steve & Karen.  The countryside is rural farm country, so I went for a long bike ride to enjoy the scenery. The locks are 10 miles from the nearest town, so we cooked spaghetti on board – I learned that you don’t really need to cook the whole box for two people.  We’ll have spaghetti for dinner for awhile.

Here are some pictures:

The Joint Adventure at Lower Brewer – Steve & Karen’s boat is in front of us, and another boat that tied up late in the afternoon

The last of the locks on the Rideau Canal! Four locks in series lowers us to the level of Lake Ontario, just 5 miles away!

So we are now docked in Kingston, on the shore of Lake Ontario. We’ll spend the next 4 days exploring the city and the area until Trish & Pat join us mid week. Another milestone on our journey!

One thought on “THE LOWER RIDEAU”