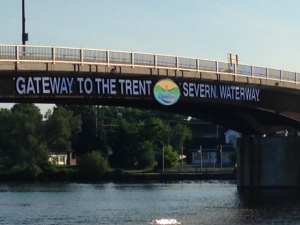 We have arrived in Trenton, Ontario – we’ve now reached the beginning of the Trent Severn Waterway – a major milestone on our journey! We arrived Friday after a 2-day, 75 mile run west from Kingston, Ontario, with an overnight stop in Picton.  Picton is a pleasant, moderate-sized town at the southern tip of a protected bay off the North Channel of Lake Ontario.  We arrived before noon then scrambled to a pub to catch the USA-Germany World Cup game over lunch. We cooked dinner on board and watched the sun set as we ate dinner and drank wine on the bridge. We’re now in Trenton, waiting for the arrival of the rest of the crew that will be with us for the next week.  Trenton is a pleasant waterfront town with a small, very friendly marina (Fraser Park Marina) at the mouth of the Trenton River next to downtown.  The waterfront park features live music several nights a week, a couple or restaurants with patios overlooking the park and the river, and a farmers market. The weather is sunny and hot!

The Trent-Severn Waterway has a distinct history, different from all the other canals and waterways on our trip. It is 240 miles long and contains 44 locks which raise and lower boats to the various levels of the lakes and rivers that make up the Waterway. One “lock” is not a lock at all, but is a marine railway that literally lifts the boat out of the water and carries it on rails to the next level.  I’ll provide pictures and more information on the marine railway and on two unique “lift locks” when we get there.  Building a canal to connect Trenton on the north shore of Lake Ontario to Port Severn at the northeast corner of Lake Huron for military purposes due to tensions with the United States was first examined in the 1780’s.  However, by 1815, it was ruled out as a military necessity and the idea dropped. Over ensuing decades, the idea was repeatedly revived and pushed by various special interests, but never gained traction or, more importantly, funding.  However, in response to economic needs and more demand to move people and goods around the area, numerous individual projects were undertaken, including constructing dams to raise water levels and individual locks at various locations linking adjacent lakes. After a re-examination, the Canadian government again concluded in 1875 that a continuous waterway from Trenton to Port Severn was not needed.  However, more individual locks continued to be built.  Then, around 1907, it was determined that combining locks with new hydroelectric power-generating dams would be an economic boon, so construction began in earnest – the locks were somewhat of a by-product of the hydroelectric dams.  By 1917, the lock at Big Chute was all that was needed for a continuous link. In order to accelerate the opening of the waterway, it was decided to construct a temporary marine railway at Big Chute for use while the lock was being constructed; as a result, the complete waterway opened in 1918 – 90 years after construction on the first lock had started! (contrast that with 5 years for the Rideau Canal and 8 years for the Erie Canal). However, in 1920, funds ran out, and the lock at Big Chute was never completed. Instead, the marine railway was enlarged in 1923 and remains in operation today – a historic and fascinating relic resulting from a quirk of history that was never intended .

Back to our trip. Most notably, Trish and Pat joined us in Kingston, so everything has changed! Here are some pictures: 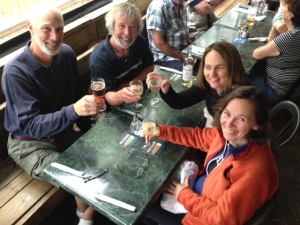 Our celebratory dinner in Kingston upon the arrival of Trish & Pat! 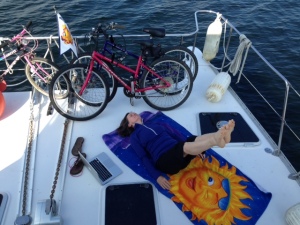 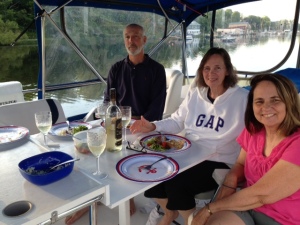 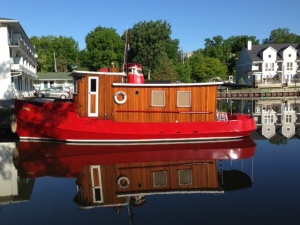 An interesting boat in Picton Harbor

The waterfront park along the Trenton River, early Saturday morning 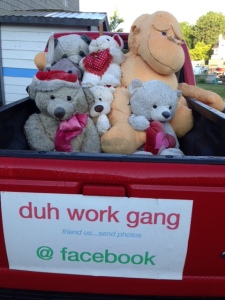 I think I picked the wrong work gang…

One more tidbit – you may recall from my last blog that we found ourselves at a restaurant in Kingston on “Stand Up And Sing Night”, in which you would get a free desert if you stand up at your table and sing a song – which I did. A few people have asked what song I chose – I sang “Mary Had A Little Lamb” – all three verses. Only a few people left.

4 thoughts on “THE UN-NEEDED WATERWAY”