A number of people have asked questions about the boat, our operation of the boat, and our daily routines. So here’s some general information:

We chose a power catamaran over a monohull for this trip for a number of reasons. First, it is much more fuel-efficient. A typical monohull of comparable size might get 3/4 to 1 mile per gallon of fuel at cruising (planing) speed, while the power catamaran gets close to 3 mpg. This is because a monohull gets its stability from a lot of weight down low, while a catamaran gets its stability from its width (17′ in our case). It therefore can be lighter and has to push less water out of the way and doesn’t have to push it as far because there are two smaller hulls instead of one larger hull. Second, because it is lighter and gets its stability from its width, it has a shallower draft (depth) than a comparable monohull – very important for shallow water areas and gives us more flexibility regarding where we can go. We draw less than 3 feet (that doesn’t mean we’re immune from going aground, however – we just have to work a little harder at it). Third, it has a lot of living space due to its width – it actually has two full-sized queen beds (though the cabins they’re in are quite small) and the dinette converts to a full-sized king bed. Lastly, the ride is quite nice in most conditions – it handles moderate seas quite well unless they’re from the beam (side) and it doesn’t roll like a monohull. That said, it has some disadvantages. It causes a very sharp motion if you take waves on the beam. Therefore, when steering, effort is made to avoid taking waves from that direction. Second, due to the hull design, access in the cabins and access to service the engines or other mechanical parts in the engine compartment is restricted. Lastly, since it is wider than most boats, finding dockage can be more challenging during busy times, but so far that has not really been a problem.

The primary tools we use for navigation are a Garmin chart plotter/radar with a touchscreen, and paper charts. For safety, we have redundancy – two older GPS units plus a hand-held GPS unit, plus we recently put a Garmin App on an IPAD. We have a full set of paper charts on board for everyplace we plan to go. Even so, we had a challenge on the Ottawa River. The chips in our electronic devices did not cover a section of the Ottawa River. Since we have paper charts and have experience navigating that way, we decided not to buy the extra chip (for $150) that covers all of upper Canada for that one little portion of the river, but decided that we would use the paper charts for that area (the old fashioned way). What we didn’t know, however, is that since we were on the river so early in the season, none of the aids to navigation would be in place yet. The river is quite wide in places with a lot of shoaling, so the channel meanders all over the place between the wide banks. With few natural features to use for identification, it was challenging at times to pick our way forward and stay in the unmarked channel.

Our typical day when we plan to move starts fairly early, particularly in areas where the wind is likely to pick up or the weather deteriorate as the day goes on. We’ve been underway as early at 6:00 AM, although 7:00 – 8:00 would be more typical. If we plan a short run or have to wait for locks to open and/or wind or weather is not a factor, we might leave as late as 9:00 or 10:00. We like to arrive at our destination by early afternoon to have the afternoon to explore wherever we are. We typically eat breakfast and lunch on board, often underway, and might have dinner on board or at a local restaurant, diner, or pub. We like to meet and talk with the local people, so we often look for a local pub or diner for dinner. In smaller towns or villages, we usually leave the next morning (weather permitting), but in major cities we stay much longer to see the sights and experience the city (we stayed for a week in Ottawa and four days in Kingston).

Fuel costs generally between $4 and $5 per gallon.  We will probably travel 6,000 miles or so – at $4.50, fuel costs will run around $9,000 for the trip.  When divided up among those on board at any given time, the cost is not bad considering it is a year-long trip.  So far, we have stayed in marinas or tied to seawalls in towns and canals.  We purchased a season-long Canada Pass for $600 which pays for all our lockages in Canada and allows us to tie up to any available seawall for free, except for a $10/night charge for electric if it is available.  Many towns provide seawall space for free as well to encourage boaters to stop overnight – our 7 nights in downtown Toronto cost just $10/night for the electric hookup. Once we’re in the Great Lakes and beyond, we’ll likely do some anchoring and staying on moorings, which are cheaper than marinas.  Marinas usually cost between $1/foot and $1.75/foot in this part of the country (times 34 feet) – again, not too bad when divided among those on board.

So we have spent the last 4 days exploring Kingston, Ontario – a vibrant city with a strong military history. The city is strategically located at the confluence of three waterways that were critical for transportation and defense in colonial times – Lake Ontario, the St. Lawrence River, and the Rideau Canal.  In fact, Kingston was considered by the British to be the most important defensive position in all of Canada. It was primarily a French-speaking area until British royalist settlers flooded the area to escape the newly-independent 13 American colonies in 1783. As a result, the name was changed to King’s Town (later shortened to Kingston) to demonstrate loyalty to King George. A series of fortifications were built between 1832 and around 1850, during which time the British were quite concerned about a possible invasion by the Americans, who tried unsuccessfully to invade in several locations during the War of 1812. It’s interesting  to learn history here from the Canadian’s point of view – Americans were the aggressors in the War of 1812 and were successfully repelled from Canada, and Americans were the potential aggressors for the next 40 years – kept at bay by the defenses and strength of the Canadian military. Three fortifications were built in the Kingston area at that time, the most prominent being Fort Henry, built between 1832 and 1837, and several Martello towers – round stone fortifications in strategic locations.  Additional fortifications were built in the mid 1840’s when relations with Canada worsened over a dispute regarding the border of the Oregon territory.  Tensions eased when that dispute was resolved in 1846, but more fortifications were added in 1862-1863 as tensions again arose during the American Civil War. However, by 1870, relations between the two countries became friendly, and the decline in manning of the fortifications was underway. Today, the military history of Kingston is prominently displayed and is part of the fabric of the city. Here are some pictures:

Built in 1832-1837, Fort Henry was the main fortification to prevent the Americans from shutting off Canada’s supply routes on the St. Lawrence and Rideau Canal between Montreal and Quebec City to the east and Upper Canada (now Ontario) to the west

A visit to Fort Henry provides a continuous series of re-enactments, including marching drills with the band, actual firing of one of the cannons, and other full-dress re-enactments 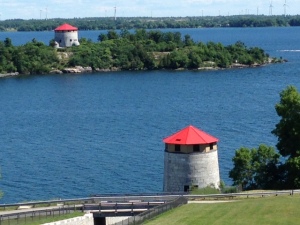 Two of the 4 Martello Towers that still exist in Kingston – this picture is taken from Fort Henry, overlooking the mouth of the St. Lawrence River. Martello Towers were used to add to the defense of the area because they could be built relatively quickly and cheaply and did not require a large contingency of soldiers to man

The inside of one of the Martello towers, which is now a museum

A prominent part of both Kingston’s history and its vibrant present is the Royal Military College, often referred to as the War College, seen here from Fort Henry. It is analogous to America’s West Point

Kingston is a beautiful city with great architecture and what seems to be a vibrant economy. It grew up based on the military and support services for the military and its location as a transportation hub.  Shipbuilding was a major industry, and when railroads came into being, the city turned to trains – over 3,000 locomotives were built here. Today, the city thrives as a college town with three major universities (the Royal Military College and Queens University being the most well-known). There is a great deal of activity in the city.  On Saturday there was an all-day music festival, followed by a concert/exhibition in the retail/restaurant district featuring a brass band, an acrobat, belly dancers, and two fire-eating performers.  Some pictures from our stay in Kingston:

A prominent part of both Kingston’s history and its vibrant present is the Royal Military College, often referred to as the War College, seen here from Fort Henry. It is analogous to America’s West Point 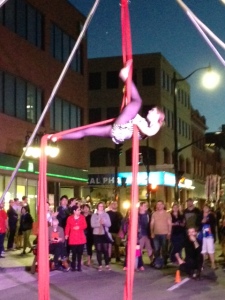 The acrobat at the street celebration Saturday evening 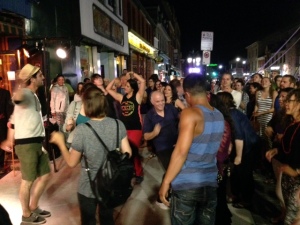 Dancing in the street to the four-piece brass band

Celebrating a World Cup goal in the local pub 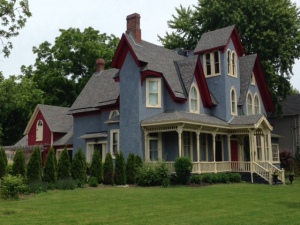 One of the many examples of historic homes in Kingston 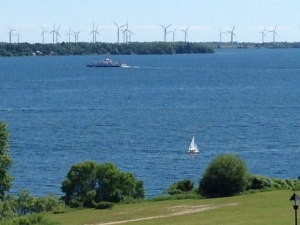 As seen from Kingston, 82 wind turbines have been erected on Wolf Island in the middle of the St. Lawrence river – enough to power 75,000 homes

Kingston was the site of the first penitentiary to be built in Canada in the 1800’s. It has just recently been vacated and is not open to the public, but there is an interesting museum in the warden’s house adjacent to the old women’s section of the prison

At dinner, we discovered that it was “Stand Up And Sing Night” at the restaurant we were at – if you stood up and sang, you got a free desert. I couldn’t resist. To put it in context – in the 6th grade, chorus was required of every student in the class – except my friend Matt Sibble and me. We were “excused” from chorus and put in a remote study hall instead. True story. I’ve been traumatized ever since – however, a free desert was sufficient for me to overcome my trauma

Paul pretending to actually do some work

So tomorrow we cast off the lines and head west. Trish and Pat arrived today (YAYY!), so now we are four. Our target is to reach Trenton, which is the entrance to the Trent-Severn Waterway, by Saturday, where Red & Mary Beth and Billy & Kathy will join us as well.

One thought on “GETTING READY TO HEAD WEST!”