One of my objectives on the Great Loop voyage is to learn to cook – being on a boat for a year and needing to eat several times each day seemed like ample incentive to do so. Thus far I have cooked the following meals ALL BY MYSELF:  (1) Baked beans in the microwave (2) pancakes (twice!) (3) vegetable sandwiches (OK, technically not cooking, but previously I was limited to peanut butter & jelly) (4) a fried egg sandwich (for dinner) (5) a tuna melt in the microwave (not a great idea…) (6) spaghetti (it didn’t seem like it would be enough for two of us so I ended up dumping in the whole box – we ate spaghetti for the next three weeks).   So it seems I need to pick up the pace a bit if I’m going to accomplish my goal of learning to cook.  Anyone have any suggestions on how I might branch out and what I might try to cook to reach the next level?

So this seems a good time for a few statistics of the trip, since we’ve reached a major milestone. So far, we’ve traveled 2,188 miles from Boston to Chicago. We’ve transited 115 locks, ranging from lifts of a foot or two to nearly 7 stories in one lift. We’ve used 641 gallons of diesel fuel for an average of 3.41 miles per gallon (not bad for a boat this size, since much of it was at cruising speed). In a few days, we will hit the 4 month mark from our departure from Boston on May 2.  We’ve had a total of 31 different people on board to share parts of the trip so far, several of whom have been on twice  – that has been the best part!

A bit more about the Chicago River. There is now a dead zone in the Gulf of Mexico covering as much as 8,000 square miles in which almost nothing can live – the water is depleted of oxygen as a result of pollution from the Mississippi River. In 2010, several environmental groups sued the City of Chicago for polluting the Gulf of Mexico, 1500 miles away.  How can that be?  In fact, the US Geological Survey identified Chicago as a “primary source” of the pollution, though not the only contributor. It all started with the reversing of the flow of the Chicago River and the connecting of the Great Lakes and Mississippi watersheds in 1900 as I as described in my last update – this was accomplished by constructing the Sanitary and Ship Canal at that time. It is so named because it accomplishes two purposes: it provides a waterway for ships to pass from one waterway system to the other, and it provides a convenient depository for waste disposal for the City of Chicago. The southern end of Lake Michigan does not have much flow, and Chicago gets its drinking water from the lake – so being able to send its waste south for 1500 miles ultimately reaching the Gulf of Mexico- out of sight, out of mind – was a major enticement for the City of Chicago to want this canal built. The City has made significant improvements in wastewater treatment over the years, but the possibility of losing the path south and diverting its wastewater into Lake Michigan has given pause to many. Meanwhile, the lawsuit against the City for polluting the Gulf continues.

In any case, our path to the Illinois River and south from there will be through the Chicago River and the Chicago Sanitary and Ship Canal.  We won’t go swimming, but it is plenty clean enough today for boating.

In the meantime, Chicago is a wonderful place to spend some time. Paul and I went to a Chicago Cubs game last Friday at Wrigley Field. The Cubs beat the Orioles (sorry, Jerry, but who can root against the Cubs, who haven’t won a World Series in over 100 years?).  A few pictures: 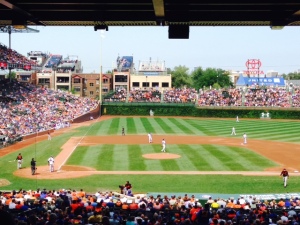 Wrigley Field – 100 years old this year, and a great place to watch a ballgame – very reminiscent of Fenway Park 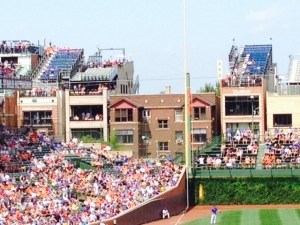 Two unique features of Wrigley Field are the ivy-covered outfield wall and the bleachers erected on top of houses across from the park. My understanding is that the Cubs threatened to sue to adjacent building owners or build a wall to block the view unless the building owners shared the revenue with the Cubs. I’m told a revenue-sharing settlement was reached, but now the Cubs are talking about erecting a huge scoreboard that will indeed block the views from some buildings. Maybe they would be better off to just focus on winning a World Series.

My son Danny and his friend Leah drove from Ann Arbor to visit on Saturday & Sunday. His buddies Joey and Lauren were participating in a “Big Ten Pub Crawl” on Saturday, so off we went to meet them. Drinking a few beers and an Irish Car Bomb (a shot of Baileys Irish Cream dropped into a glass of Guinness, then chugged) reminded me that I’m somewhat more fragile than they are….

While walking around looking for a place that had real Chicago deep dish pizza, we came upon a series of statues built out of canned goods… 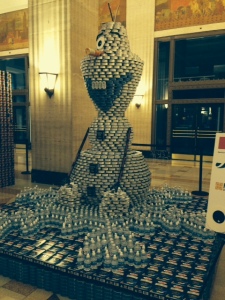 That evening, we took the Joint Adventure out on the harbor for a swim and a moonlight cruise: 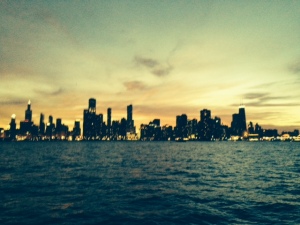 Chicago skyline from the Joint Adventure as the sun sets 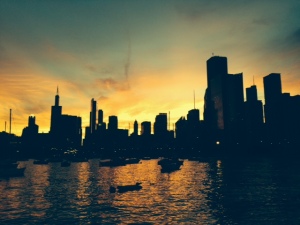 A glow over the City – 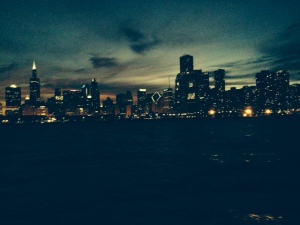 The skyline from the Joint Adventure as daylight disappeared

Sunday morning, Joey & Lauren joined us again, and we again went out into the harbor for a swim: 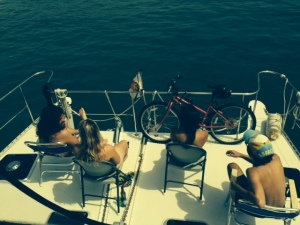 Danny, Leah, Joey, and Lauren enjoying the sights of the harbor on the “front porch” of the Joint Adventure 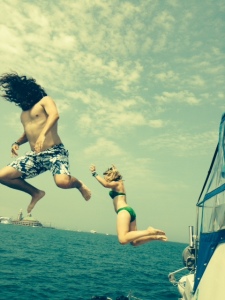 Danny & Leah practicing their dives for the Olympics – I think his head is somewhere under that hair…. 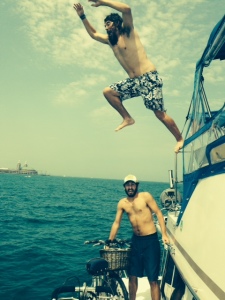 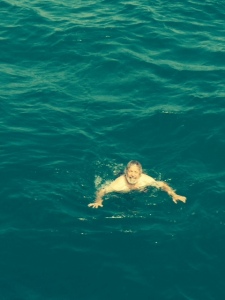 I got into the act, but not with the style of Danny & his friends –

After our swim, we took the Joint Adventure through the lock from Lake Michigan and into the Chicago River. It was a hot and sunny Sunday afternoon, so the narrow river was jammed with boats. When there was a break in the action, I took a few pictures from the Joint Adventure: 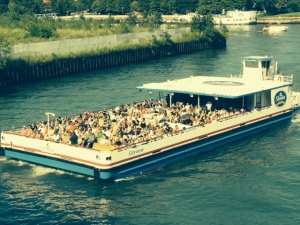 This was actually taken from a bridge over the river – these enormously wide tour boats go up and down the river, sometimes taking up over half the width of the river, forcing all other traffic – other tour boats, small boats, cruisers, kayaks, and the like – to maneuver around them 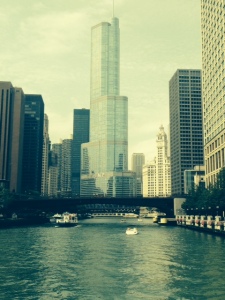 The building dead ahead is the Chicago Trump tower 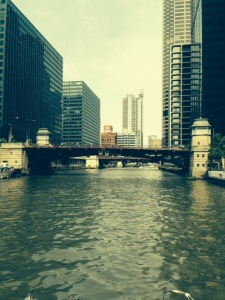 There are many more sights, museums, and things to do in Chicago that could be done in the time available, but here are some other sights in Chicago: 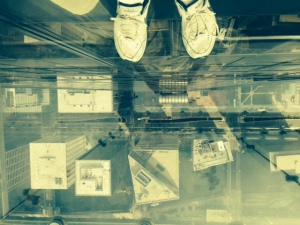 Standing on the glass floor looking down over 100 stories – 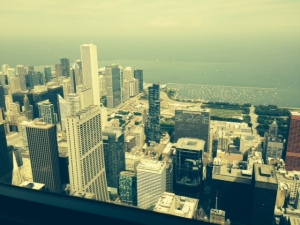 View from the top of the Sears Tower, looking toward Lake Michigan and the harbor. The Joint Adventure is docked in the marina of which you can see a small portion to the left of the boats that are at moorings 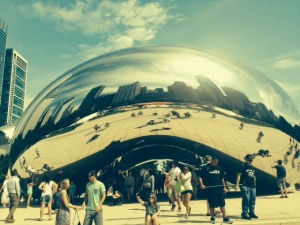 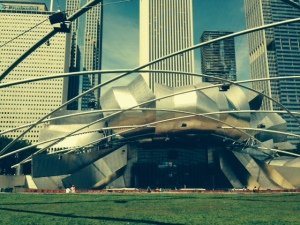 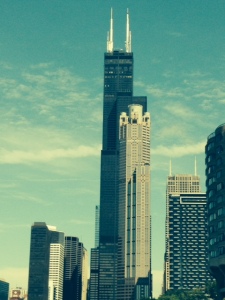 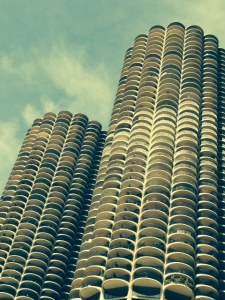 Sometimes referred to as the “corn cob building” – the lower levels are actually a parking garage in which the rear of the cars are visible when you’re further away from the building. Apparently one car did drive off and landed in the river – however, it was part of a movie shoot 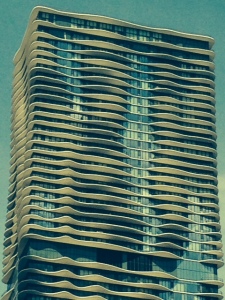 This is one of the most interesting buildings in Chicago – recently built, it is the tallest building in the world that was designed by a woman architect

Tom and my Dad arrive tomorrow, and we plan to head south through the city and into the Illinois River this weekend, depending on when we get a weather window.  Think sun!

One thought on “READY TO HEAD SOUTH!”