After our experience with floodwaters on the Mississippi, who would ever have thought that we would soon be facing issues with low water? But that’s the case on the Tennessee River. The watershed feeding the Missouri River caused the Mississippi River flooding, but the Tennessee watershed has experienced a drought – we’ve seen only one short rainfall in the past three weeks. Thus, the water level on the Tennessee River is 4-5 feet below normal, and we’ve already been turned away by one marina due to low water in their entrance channel, despite our shallow draft of under three feet. Welcome to the vagaries of the Inland Rivers!

Regarding the Tennessee River – In 1931, a legislative bill which would create and fund a federal agency to build a hydroelectric dam on the Tennessee River to generate electricity was passed by Congress. President Herbert Hoover vetoed it, calling it a “socialist” program.  A year later, Franklin Roosevelt was in the White House pushing through the “New Deal”.  This time, a far more expansive bill became law – it created the Tennessee Valley Authority (TVA), which Roosevelt signed in 1933. It’s charter was to construct dams and other improvements to generate hydroelectric power, enhance navigation, provide flood control, and – perhaps even more important – provide jobs, economic development, and rural electrification to one of the poorest and hardest-hit areas of the country during the Great Depression. It was hugely controversial, as opponents went to court and argued that the federal government had no constitutional authority to undertake such a project – in particular, they argued that generating electricity and in essence becoming a public utility, which would compete unfairly against privately owned utility companies, was not allowed by the Constitution. As many New Deal programs did, the case worked its way all the way to the Supreme Court, which ruled in 1936 that the creation and operation of the Tennessee Valley Authority was constitutional. The floodgates (pun intended) were opened – the TVA has subsequently constructed a total of 29 dams and provides hydroelectricity to much of Tennessee, Kentucky, Alabama, and Mississippi, as well as portions of Georgia, North Carolina, and Virginia. The process of constructing the dams transformed the Tennessee and Cumberland river valleys and remained controversial, displacing 15,000 families as vast regions of the river valleys were intentionally flooded (think “Deliverance”). By 1950, the TVA became the largest provider of electricity in the United States, and today remains the largest regional planning agency in the federal government. However, it is very popular in Tennessee, as Barry Goldwater learned in 1964 when he proposed selling it to private owners during his campaign for the presidency. Some of you may also recall another turning-point Supreme Court decision involving the TVA in the 1970’s: the TVA proposed another huge hydroelectric project called the Tellico Dam. In a major test case of the new Endangered Species Act, the Supreme Court blocked the project due to the projected loss of habitat of a species of snail called the “snail darter”, listed as an endangered species.

In any case, two of the TVA dams significantly impact the Great Loop experience. The Barkley Dam across the Cumberland River created Lake Barkley, and the Kentucky Dam across the Tennessee River created the massive Kentucky Lake – nearly 200 miles long, it is the largest man-made lake east of the Mississippi River. The two lakes are roughly parallel to each other, and the land between them is aptly named “Land Between the Lakes”. Generally 5-10 miles wide, it is a well-known vacation destination in this region of the country, with water sports, spectacular scenery, hiking, and a great deal of history, much of it centered on the Civil War era.

Last week, we passed through the Barkley Lock, and entered Lake Barkley where we stayed Friday and Saturday nights. After passing through a 1.5 mile canal that connects Lake Barkley with Kentucky Lake, we passed by the top of the Kentucky Dam and headed south on Kentucky Lake, which is the flooded river valley of the Tennessee River. It is a beautiful lake with large state parks at intervals along the shore. We spent two more days heading south through Kentucky, then entered our 9th state – Tennessee!  Here are some images: 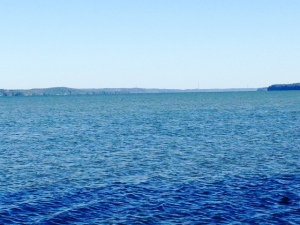 Kentucky Lake, which is a portion of the Tennessee River which was flooded by the construction of the Kentucky Dam by the TVA. Construction of the dam started in 1938, and the lake began to fill with water when the dam was finally completed in 1944

The marina at Paris Landing State Park, Tennessee. Many of the slips are empty as we are well into the Fall 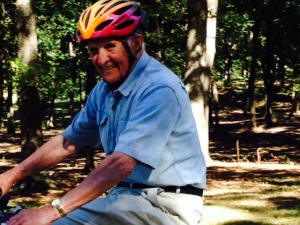 The start of training for the Tour de France…

On our third night on Kentucky Lake/Tennessee River, we stayed in a small town in Tennessee called New Johnsonville, with a rich history that is well-presented in a small but fascinating museum. Johnsonville (as it was called at that time, named after future-President Andrew Johnson, then-Governor of Tennessee) was little more than a river landing until early 1864 when the Union Army decided they needed a new, more secure supply route using the Tennessee River to support its advances into the south. Within six months, an enormous complex of wharfs, warehouses, fortifications, housing, and support facilities was constructed and Johnsonville became a crossroads for supplying the Union army, particularly Sherman’s army as it marched towards Atlanta. An innovative Confederate General named Nathan Forrest was given the task of interrupting the supply line to try to slow Sherman’s march. With a small group of men, he attacked using artillery from the other side of the river and managed to completely destroy the entire complex, including 33 Union supply ships and over $6 million dollars worth of supplies (an enormous supply depot in those days). In response, the Union army sent an entire brigade of 15,000 men to stop General Forrest, but he was long gone by the time they arrived. The complex at Johnsonville was never rebuilt, and by 1940 the town housed only 300 residents. Along came the TVA and the Kentucky Dam – all 300 residents were relocated to higher ground further up the river bank, and Johnsonville, along with the actual site of the battle, disappeared under the rising water. Hence, the new town became New Johnsonville, as it is called today.

Back to our trip. In New Johnsonville, we stopped at Birdsong Marina, home of the only fresh water pearl farm in North America and home to, of all things, a Pearl Museum. After testing many freshwater locations, the owners found the right temperature, water quality, acidity, etc. in the Tennessee River. After investing a reported $5 million, they began seeding mussels then hanging them from baskets in the water for an incubation period averaging 8 years. The Museum includes a short film shot by CBS News a few years ago. They grow pearls of varying shapes except round – the Chinese produce round pearls cheaper then they can, so they only produce specialty shapes.

Here are some images from our stay in New Johnsonville:

In the pearl farm, mussels are caught by divers on the bottom of the river, then sent to a local lab where they are “seeded” with an organic material of the shape desired for a pearl – contrary to popular belief, the “seed” is organic and is not a grain of sand. The mussel is then placed in a wire mesh with about a dozen other mussels, which is then suspended from the wooden “floats” – basically pieces of lumber – then left submerged for about 8 years before they are raised again. The success rate for growing a pearl in each oyster is about 95% 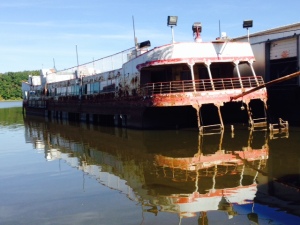 Every place has a story – this sunken tour boat at the Birdsong Marina was docked and idle for several years on the waterfront in Memphis. The Mayor insisted that it be removed, so it was given to anyone who would take it – which turned out to be the owner of Birdsong Marina. It was then towed through the Mississippi, Ohio, then Tennessee Rivers by three separate barge companies. Shortly after it arrived and was tied to the dock, it sank as a result of a hole punched in the hull during transport. All three barge companies denied responsibility and blamed the others, so it still sits on the bottom three years later while the courts decide 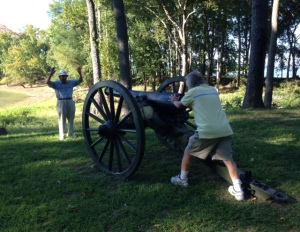 Don’t shoot!! You can have the last Heinekin!!

Dinner in the gazebo at the end of the dock – 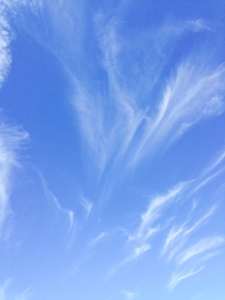 Some really cool cloud patterns while running on the Tennessee –

Let’s not forget – we ARE in Tennessee….

We wanted to visit Nashville – Birdsong Marina did not have a courtesy car, but one of the employees amazingly loaned us her personal vehicle so we could drive the 70 miles to Nashville where we spent the day sightseeing. Here are some images:

Broadway and 2nd Avenue in the heart of Nashville are lined with pubs, all featuring fantastic Country & Western bands all day and into the wee hours. We randomly picked a place to have a couple of beers and were entertained by an extraordinary band 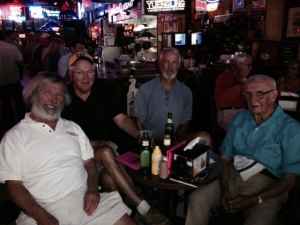 Enjoying the wonderful music at the pub on Broadway in Nashville

Now this is the kind of deal my son Danny needs….for those not quite in touch, a “PBR” is a bottle of Pabst Blue Ribbon beer (I wouldn’t have known if Danny hadn’t told me…)

The Country Music Hall of Fame – a must see in Nashville – 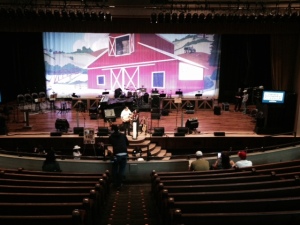 The stage at the Grand Ole Oprey, getting ready for a performance that evening

So we continued our journey south on the Tennessee River.  Here are some images from the river as well as our stops along the way: 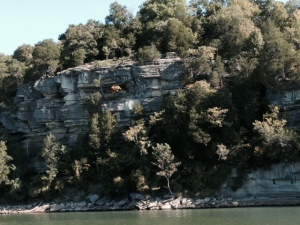 One of many interesting homes along the Tennessee River 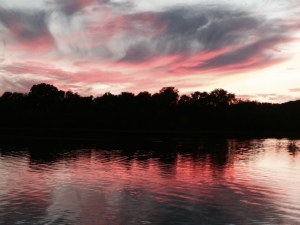 Another sunset along the Tennessee River –

So why did I take a picture of this spider? Well, on evenings that we eat cook aboard, we usually eat on the bridge about the time of sundown. This large spider took up residence at a corner of our canvass top, becoming active spinning his web around dusk. We watched him with fascination for several nights, discussing his strategy and tactics for catching his dinner. He’s now become a member of our crew, providing entertainment and a topic of conversation at dinner on the bridge. So I thought I’d share him (her?) with you 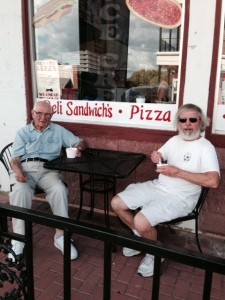 Finding an ice cream parlor is always a high priority. However, we’re very disciplined – only on rare occasions do we hit two in one day –

Now, these are my kind of gas prices…

A pleasant marina in Clifton, Tennessee – located in a small cove, everything floating with the fluctuating river level –

So, you may recall from the beginning of our trip our saga with the toilet which resulted in Dave Luciano and I installing a brand new “man-sized” toilet in the boat. I thought my toilet woes were over forever.  Not to be. We managed to again clog the system, requiring us to spend the better part of a day trouble-shooting. Bottom line, we are having a new pump and discharge hose air-freighted to our next stop – however, since it is Saturday, we won’t get it until Tuesday, meaning we are without a toilet for 4 days. No questions, please.  Dave, help!!

So – back to the title of this post. When in Nashville, we went on a backstage tour of the Grand Ole Oprey. The tour guide told us how Dolly Parton was asked one day how long it took her make-up crew to make her hair look perfect. She replied: ” I don’t know – I’m never there when they do it”.  She went on to say: “It’s mighty expensive to look this cheap.”  The great Dolly Parton.