Here it is again….does this look familiar?

You may recall that, early in our trip, in Albany, New York, our toilet became clogged to the extent that we had to remove it completely to try to unclog it. Many boats, including this one, are built with a “compact” toilet.  Not very convenient.  So we decided that if we had to perform the somewhat unpleasant task of removing the toilet in its entirety, we would “upgrade” with a brand new, “man-sized” toilet.  Which, with the help of Dave Luciano, we did.  YYAAYY!  A brand new toilet!  No more toilet woes!  Not to be.  Earlier this week, we successfully managed to clog the new one, or so we thought. It turned out that we instead clogged the discharge hose that goes to the holding tank.  Then in the process of trying to make it work (i. e. forcing it when we really knew better), we seem to have damaged the pump on the toilet.  !#@#%&!!.  We were in southwest Tennessee – otherwise known as “The Middle of Nowhere”.  No place to buy parts.  Of course it was Friday afternoon, so parts couldn’t be shipped out until Monday, for overnight delivery on Tuesday. I’ll spare the details, but we kept moving and had the parts shipped ahead to where we would be on Tuesday.  The parts arrived, and our big-boy toilet is again functional. Among other things, we learned that you really need a toilet on a boat…

So – knowing that we had a 60 mile run and a large lock to go through on Sunday, we left early. The lock was only 9 miles from our destination, so when we arrived at the lock by 3:00 PM, we thought we were in good shape.  Not to be – a tow had just started locking up, and he was too large to fit in the lock all at once;  therefore, they had to separate the barges into two sections, lock them up separately, then re-assemble them at the top.  Four hours later – at 7:00 PM and in virtual darkness, we finally were locked through and emerged at the top. For the next hour, we picked our way 9 miles up the river in the dark, including turning the corner from the Tennessee River onto the Tenn Tom Waterway. Getting into the marina in the dark where we had never been and finding our slip was another challenge;  however, by 8:30 PM we were tied up. We were happy to be greeted by our new friends Harvey & Mary Helen on the boat “Lollygagger” (also doing the Great Loop), who quickly invited us onto their boat for a much-appreciated cocktail. We finally had a dinner of beans and applesauce at 9:30 PM.  Just another day on the water!

As are most “loopers” whom we meet, Harvey & Mary Helen are fun and interesting people. Harvey was a Virginia State Legislator for 32 years, and mesmerized us with stories from Virginia politics. We exchanged political views and all complained about one thing or another.

So we have now finished our run down the Tennessee River – a very beautiful river through mostly remote countryside. Here are some images from our final days on the Tennessee: 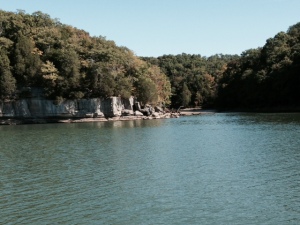 There are many creeks that empty into the Tennessee, including this one entering from the right of the rock formation. Most of the marinas along the Tennessee are located up these creeks, sometimes a couple of miles up a narrow, winding, but beautiful channel

Another interesting home along the river – notice the hot tub in the rock enclosure overlooking the edge of the cliff. I could live here….

Due to flooding, even mobile homes are now put on stilts – 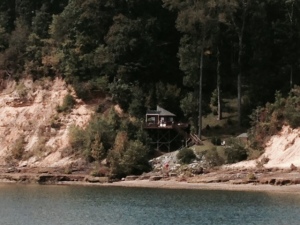 An interesting place to put a house – 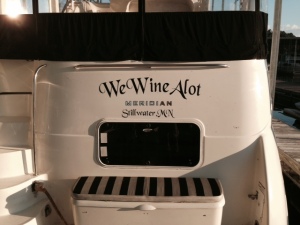 So we entered the Tenn-Tom Waterway, another significant milestone on our journey. The Tenn-Tom connects the Tennessee River with the Tombigbee River, cutting as much as 720 miles off the trip between various ports and creating the path we are following to the Gulf. The waterway was originally proposed by the French in the late 1700’s, followed by lobbying in 1810 by citizens of Knoxville who urged Congress to construct the waterway. However, the first engineering study wasn’t performed until 1875, when it was determined that the 43 locks needed for a 4 foot deep channel was uneconomic. Another study was done in 1913, in which it was determined that 65 locks would be required for a 6 foot deep channel – again determined to be uneconomic. Further studies were done in 1923, 1935, 1938, and 1945 (as we know, our government likes to study things…).  In 1946, Congress finally approved construction of the waterway. However, continued opposition delayed the project until President Nixon included $1 million for the project in his 1971 budget to build the waterway, and construction began. In 1977, with construction well underway, President Carter tried to stop construction;  nevertheless, Congress continued to fund the project. After spending nearly $2 billion, the Tenn-Tom was finally opened in 1985. Yes, Nixon approved $1 million for construction, and the final cost was just shy of $2 billion. Though the Tenn-Tom Waterway is relatively unknown, the enormous 243 mile project is the largest ever performed by the US Army Corp of Engineers – more earth was moved than in the construction of the entire Panama Canal!  Of course, despite all the studies, the Tenn-Tom will never be “economic”, but we’re glad it’s here – otherwise, we would be fighting the Mississippi River all the way to New Orleans!  Some images: 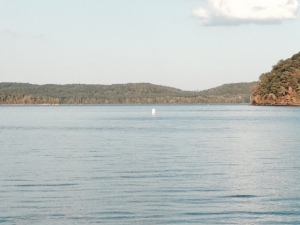 The junction of the Tennessee River and the Tenn-Tom Waterway. It looks much different in the daytime, as we turned the corner and entered the Tenn-Tom Sunday night in the dark 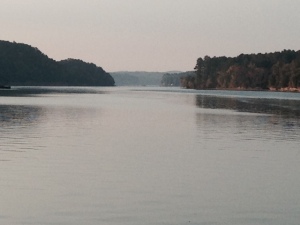 Heading south on the Tenn-Tom, the river narrows, and eventually transitions into a 25 mile man-made canal

Although the weather remains hot as we continue south, generally in the 80’s, the leaves are beginning to show some fall colors along the river

We used the courtesy car at the marina in Cource, Mississippi to drive to Shiloh to visit the museum and battlefield at one of the bloodiest battles of the Civil War. The two day battle resulted in over 23,000 casualties on both sides, finally resulting in a critical victory for the Union forces commanded by General Grant. The memorial park is enormous, as the battle raged over a large area adjacent to the Tennessee River. Here are some images: 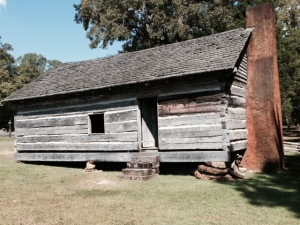 The church at Shiloh, a critical place in the see-saw battle which was alternately held by the Confederate and Union forces over the two day period.

The inside of the church –

Pittsburg Landing on the Tennessee River, where General Grant landed his troops to try to penetrate deep into the South. In the Shiloh battle, the Confederate forces launched a surprise attack to cripple the Union army, then tried to capture the Landing to prevent Union General Buell from crossing the river with 13,000 Union reinforcements which were expected within days. Though the Confederate forces were clearly victorious on the first day of the battle, they did not capture Pittsburg Landing. General Buell and his army arrived and were ferried across the river that night, and the Union army forced the Confederate army to retreat with heavy losses the next day. 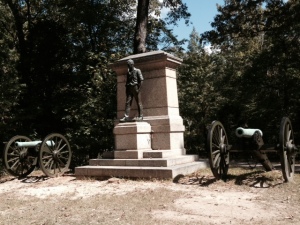 At Shiloh, we learned more about the battle of Johnsonville and Confederate General Nathan Forrest, who, you may recall from the last blog post, successfully destroyed the entire heavily-fortified supply depot at Johnsonville with a small group of men and some artillery. It seems that, as a result of  the strategic artillery barrage by Forrest, the Union commander of the supply depot became convinced that the Confederate forces were much, much larger than they were. As a result, he ordered his own men to set fire to the supply depot and intentionally burned the $6 million worth of supplies, the remaining ships, etc. to keep them from being captured by the Confederates.  We also learned that, although we up North generally know nothing about General Forrest, he is a major hero in the South and was a huge figure during the war in the South. Below is a picture of a historical plaque at Shiloh which says it all:

Apparently Confederate General Forrest was quite a soldier

Back to our trip – we reached another major milestone on Sunday as we left Tennessee and entered our 11th state – Mississippi. We are now about 450 miles from the Gulf of Mexico. There are reminders everywhere that we are well into the Bible Belt:

Driving along the highway on our way to Shiloh, we came upon this enormous cross – there was no church or other building around, just this cross. Notice that it matches the height of the adjacent full-grown trees!

Even on the waterway, there are reminders that we are squarely in the Bible Belt…

We arrived in the Mississippi town of Fulton, just 17 miles from the town of Tupelo, birthplace on Elvis Presley. How could we not go? The marina wouldn’t let the courtesy car go outside the Fulton town limits, so we found a local guy who agreed to take us there and back for a small “donation”. Fearing a tourist trap, my expectations for the Elvis Presley birthplace museum weren’t very high;  however, it was actually quite well done and I learned some things about Elvis that I didn’t know (which was easy, since I didn’t know anything).  Anyway, did you know that: (1) Elvis had an identical twin, who was stillborn (2) Elvis’s family lived in the poorest section of a very poor, Mississippi town during the Depression, and (3) Elvis’s father was a sharecropper and sold a pig to pay his rent. The buyer would only pay $4, but Elvis’s father was desperate.  Knowing that the pig was worth much more than $4, however, he took a pen and wrote in a “1” in front of the “4” on the check, making it $14 instead of $4. He was arrested for forgery and sentenced to 3 years in jail. He was released after 8 months, but lost his job and his house as a result. As a result, he moved the family to Memphis in pursuit of a better life, and the rest is history.

Here are some images:

This is the two-room house where Elvis was born and that his Dad built as a sharecropper. It had no electricity and no plumbing. His Dad lost the house as a result of his time in prison

The kitchen/dining room of the Elvis house

When I saw this outhouse on the grounds of the Elvis birthplace museum, I thought it was a bit over the top. However, the museum used the replica outhouse to show one aspect of life growing up very poor in a very poor southern neighborhood, explaining that often multiple families shared a single outhouse like this one. Also, in keeping with the theme of this post, I’m guessing that they didn’t have to deal with a clogged toilet like we do…

One last thing from the Elvis museum – the plaque shown in the picture below was on the wall at the museum – I have no idea why. However, you may recall from an earlier post the story of Tom and Tim, the grandfather/grandson team that we met early in the trip and with whom we’ve become good friends. The name of their boat is “IF”. When I asked Tom why, he explained that he loved the poem “IF” by Rudyard Kipling. I don’t know much about poetry, but I happened to know this poem well and recited a verse by heart at the time. In any case, if you are not familiar with the poem, here it is as shown on the plaque at the Elvis museum:

If, by Rudyard Kipling

Having completed our day of sightseeing, tomorrow (Friday) we continue heading south on the Tenn-Tom.