This post is dedicated to my Dad.  Known to others as Hank, my Dad officially turned 90 on October 25, 2014 – he was born on that day in 1924.  A member of “The Greatest Generation”, he grew up during the Great Depression, then served in General Patton’s 3rd Army as it liberated France and Germany in 1944-1945. Like so many other returning soldiers, he married shortly after he returned stateside, and he and my Mom started a family. Four children – two boys, two girls. Nothing remarkable about the story, but everything remarkable about the man, the father, the human being.

Not a lot of money, but a lot of love.  Although he grew up in downtown Buffalo, he wanted to live in farm country. So he scratched and saved to buy a plot of land on a rural, country road. He and my uncle then built my uncle’s house, then our house themselves, since they couldn’t afford to hire someone to do so – every night after work except Fridays, and every weekend. More than just a house, it was a happy home. He worked hard, but always made time for his family. So much more I could say, but you get the sense. How fortunate I was to have my Dad as my father!

So we four kids planned this small birthday celebration for my Dad in Buffalo where he lives. He was insistent that he did NOT want a party, so we kept it small. However, a number of close friends of Trish and I have also become friends with my Dad through our annual bicycle trips – for the past three summers, my Dad and I have organized a week-long bike trip for about 15 of our friends in which we biked each day, then stayed either in a campground or a B&B each night. My Dad drove a 30 foot RV along the route, ferrying stragglers, bringing us lunch, and otherwise supporting us in every way. Yes, my Dad was 87, 88, and 89 while supporting us in a 30′ RV (he would have again this past summer if it weren’t for the Great Loop trip). So a number of the “bikers” wanted to come to Buffalo to see Hank and help celebrate his 90th. We therefore rented an RV in Boston and drove together to Buffalo for the celebration. Here are a few pictures from the weekend: 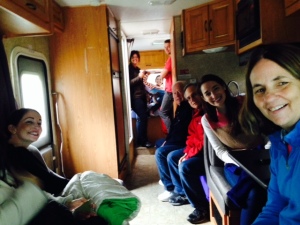 On the way from Boston to Buffalo in the RV on Friday afternoon – Happy Hour!

On Saturday, we all piled into the RV and went to Niagara Falls, about an hour from my Dad’s house

A trolley ride to get around the grounds at the Falls 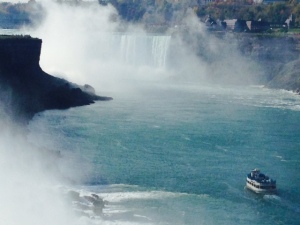 Donning the raincoats (I use the term lightly…) on the Maid of the Mist. Between the wind and the spray next to the Falls, I’m not sure the raincoats did much good…but we sure looked the part – 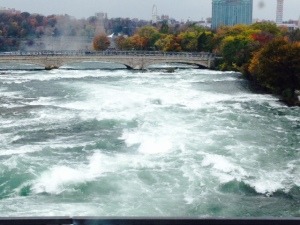 Saturday night we had Happy Hour at my Dad’s house, then we had a dinner party in a reception room at a local restaurant.

My Dad with our four kids – from left to right, Chrissie, Hank, Jenny, Jessie, and Danny 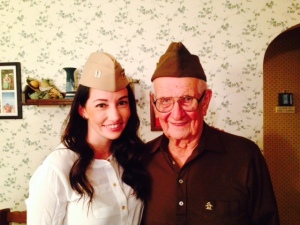 Granddaughter Jessie, who is currently serving in the Navy JAG Corp and my Dad – both wearing their military hat, known as a “garrison cover” – my Dad’s from his service in World War II

My Dad dancing with granddaughter Jenny Saturday after dinner- 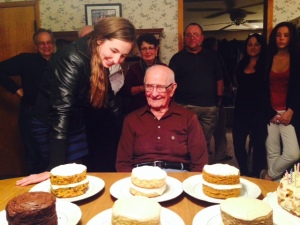 So a week or so ago, Jenny asked my Dad what her favorite cake is, to which he replied “I don’t know”. Jenny thought that by the time someone turns 90, they should know what their favorite cake is. So she made six cakes, all a different flavor, and had him taste each one to decide, once and for all, what his favorite cake is. Chocolate. Now he knows.

As the party progressed into the evening, some of the dancing moved outside under the lights. Not sure exactly what this is….also not sure how many drinks they had…

So back to the Great Loop trip. Before leaving for Buffalo, we spent a few days in Fairhope, Alabama, a city about 10 miles south of Mobile on the eastern shore of Mobile Bay where the Joint Adventure is docked. Fairhope was first settled in 1894 when a group of idealists, reformers, and free thinkers left Des Moines, Iowa to start a model community. They found what they felt was a good location and declared that they had a “fair hope” of success – they therefore named their new settlement “Fairhope”. Today, Fairhope is a small, upscale, fairly prosperous tourist city with many restaurants, shops, and boutiques in a charming historic downtown district which is on the National Register of Historic Places – very different from the poor, struggling towns we visited through rural Alabama along the rivers. Here are some images from Fairhope:

A cool house along the Fly River in Fairhope 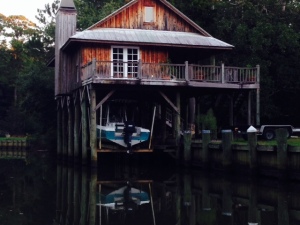 Another cool house along the river

Another option for living along the Fly River in Fairhope –

A graphic illustration on the side of a building along the Fly River, showing the water levels of recent hurricanes and floods

This Great Blue Heron was perched on the railing of the long pier in Fairhope that extends out into Mobile Bay. There is a nice casual restaurant on stilts over the Bay about halfway out on the pier

This is the third alligator we’ve seen so far – the other two were live along the Black Warrior-Tombigbee Waterway, and were enormous – they looked to be about 12-14 feet long. They quietly slinked from the riverbank into the water as we passed by. This one stayed put. 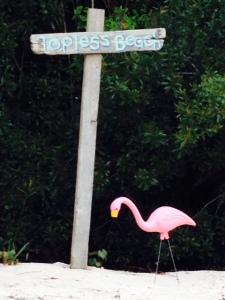 Unfortunately, I was the only one who showed up….

I also spent a day in Mobile, exploring the city. The French founded Mobile in 1702 as the first capital of their new colony, La Louisiane – the original settlers were Acadians who were forced to leave Nova Scotia by the British. The original location of the settlement was 20 miles up the Mobile River, where they built a wooden fort. There was a dramatic need for women, however, so in 1704, twenty three women who were taken from orphanages and nunneries were sent on a ship called the Pelican to become wives of the soldiers and pioneers – they became known as the Pelican Women.

The original location of the settlement proved to be poor due to flooding and frequent outbreaks of Yellow Fever, so in 1711 the settlement was moved to its present location at the head of Mobile Bay. When the French lost the French and Indian War in 1763, they ceded Mobile and the surrounding territory (along with Quebec) to the British, and Mobile became part of British West Florida. In 1780, when the British were preoccupied with fighting the American Revolution, the Spanish took their turn – they attacked and captured Mobile. The Spanish then ceded the fort to the Americans in 1813, at which time Mobile became part of the Mississippi Territory until Alabama obtained statehood in 1819. Mobile’s growth was fueled by cotton, which was shipped down the rivers from Alabama, Mississippi, and Tennessee, where it was loaded onto ocean-going vessels bound for the Atlantic coast and ports in Europe. Mobile became the second leading cotton export city in the country.

Today, Mobile is a smaller cousin to New Orleans (which, by the way, wasn’t founded until 17 years after the first settlers arrived in Mobile). The city remains a major international seaport, which is the lifeblood of the city. The architecture, music, and culture are quite similar to New Orleans, although the Mobile retains its own identity.

Here are some images from my visit: 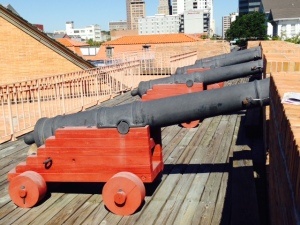 A replica of a portion of Fort Conde is located in the center of the city, and depicts much of the early history of Mobile

The entertainment district is known as Daphne Street, which is lined with restaurants and pubs, many of which feature live music. The architecture is very reminiscent of New Orleans, since the history of their development is quite similar 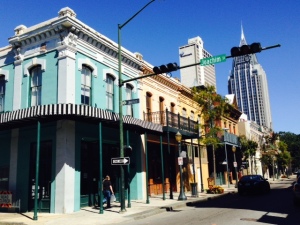 Another picture on Daphne Street 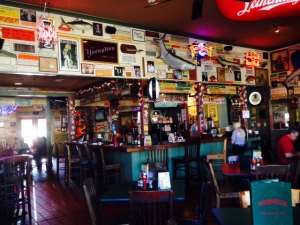 Wintzell’s Oyster House, a famous oyster bar and restaurant on Daphne Street – it was a great stop for lunch!

There is an excellent museum near Fort Conde called the History Museum of Mobile. In addition to a superb presentation of the history of the city and the surrounding area, the Museum addresses in a forthright manner the tragedy of slavery and its important role in the economy of Mobile prior to the Civil War. This famous and gut-wrenching statue of a slave at auction is presented in the Museum next to the chart below 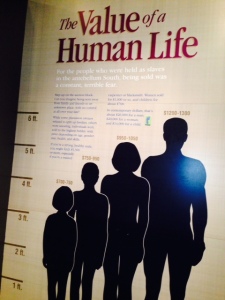 Although it may be difficult to read in this picture, this chart shows the market value of various types of slaves as they were sold in the public auctions in downtown Mobile prior to the Civil War

Dramatic, modern architecture marks the design of several of the new buildings on the skyline of the city. This one, however, hasn’t panned out as envisioned – it is a new cruise ship terminal, designed to entice cruise ships to stop here. However, with New Orleans a short distance away, the cruise ships continue to bypass Mobile. It is now being converted into a Maritime Museum, scheduled to open next year. 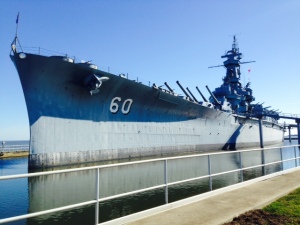 No visit to Mobile would be complete without a visit to the battleship museum and USS Alabama, a retired WW II battleship. One can’t help but be awed by the size of the ship and the enormity of its guns.

This picture is taken from the bow of the ship, looking backwards

This is a replica of the Hunley, the first submarine ever to sink an enemy ship. It was built in secrecy by the Confederacy in 1863-1864, and several crews drowned during attempts to test and deploy it. However, on February 17, 1864, it successfully planted an underwater charge on a Union ship. The Hunley surfaced and sent a coded message of success to shore. However, it then silently sank beneath the waves for reasons that have never been determined, drowning its 8 man crew. The original Hunley was located and raised in recent years, and is on display in Charleston, South Carolina 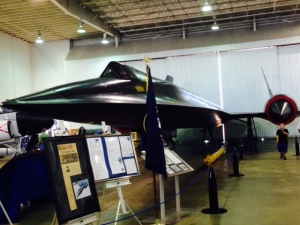 Tomorrow (Tuesday) we fly back to Mobile, then start heading east along the coast of Alabama in the Gulf Intracoastal Waterway, heading towards the Florida panhandle. The rivers are behind us, and a new set of challenges await us along the Gulf coast.