Henry Flagler was a man ahead of his time. Despite quitting school at the age of 14, he went on to co-found Standard Oil, to found Palm Beach, and to be considered the “father of Miami”. But he is best known for opening the east coast of Florida to tourism and development by building a railroad south from Jacksonville to Miami.  Before his railroad, the spectacular beaches along the Atlantic were difficult to get to and only sparsely inhabited. Flagler changed all that.

Henry Flagler first visited Florida when his wife became ill and her doctor recommended an extended visit to the warm climate. He stayed at a hotel in St. Augustine, and was so taken by the beaches and the winter climate that he began building luxury hotels along the Florida coast, including the first development in Palm Beach. However, when a hard frost hit Palm Beach but not Miami, he decided to extend his railroad to further south and build a hotel there as well. The rest is history. He had one more goal to accomplish near the end of his life, however, and that goal became an obsession. He decided to extend the railroad to Key West, 156 miles across islands, swamp, and open water, all infested with mosquitos and other insects. The longest open-water segment required a bridge 7 miles long. Concrete was chosen as the structure of the bridge to withstand the power of the sea during harsh winter storms. However, concrete at the time could not withstand the ravages of salt water, so a new salt-resistant concrete had to be developed before construction could begin. The new concrete that Flagler’s team researched and created revolutionized marine construction for many years thereafter. Work began in 1905, but hurricanes in 1906, 1909, and 1910 destroyed much of the railroad that had been built at the time and killed more than 100 workers. Still Flagler pressed on, accelerating the work so it could be completed before he died.  Finally, in 1912, seven years after the start of construction, the railroad was completed.  Flagler, by then blind, traveled in the first railroad car to make the trip from the mainland to Key West.  He told the welcoming crowd: “Now I can die happy. My dream is fulfilled”. The railroad had cost $1.31 billion in today’s dollars, all paid for by Flagler’s personal fortune. It was dubbed the “eighth Wonder of the World”.

In 1935, a massive hurricane destroyed 40 miles of the railroad. By that time, automobile travel was replacing railroad travel, so the State of Florida purchased the bridge. The state converted the old railroad bridges into the Overseas Highway, which opened in 1938, utilizing the undamaged portion of the bridges and building the highway on top of the railway. The bridge was substantially re-built again in its entirety in 1980. Without Flagler, there would be no highway access the Florida Keys  today.

At the risk of boring everyone with more pictures of bridges, this is a pretty special one so I couldn’t resist:

Not a very good picture, but this is a small portion of the original concrete-arch Seven Mile Bridge. The new highway bridge can be seen adjacent to the old railroad bridge. 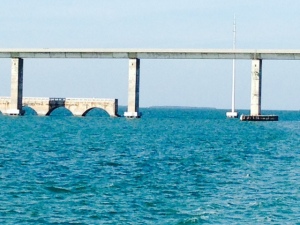 The original concrete-arch railroad bridge with the new highway bridge next to it. Each length of the old bridge has a section removed at the highest span of the new bridge to allow taller boats to pass through. Each remaining section of the old bridge is now used as a fishing pier.

One more interesting anecdote about Henry Flagler – his second wife had been institutionalized for mental illness for six years when Flagler used his political influence to persuade the Florida Legislature in 1901 to pass a law that made incurable insanity legal grounds for divorce;  he divorced his wife the following year. Flagler was the only person to be divorced under the law he instigated before it was repealed shortly thereafter.

After being spoiled by 7 days of calm, near-perfect weather in a row on our way from Fort Myers Beach to the Keys, we’re now in a pattern of windy weather. After 5 days in Key West, a one day weather window opened up and we ran 85 miles to Islamorada on Upper Matecumbe Key (I can’t pronounce them either). Islamorada consists of a narrow spit of land with commercial strip stores along Route 1 and a series of quaint and charming places to stay and open-air restaurants/tiki bars overlooking the bayside or the ocean side of the island. We stayed at one such place tucked in a small, protected harbor. Music is king here, and there was live music throughout the lunch period, the afternoon, and the evening every day. The highlights of our stay were a day of fishing with a guide and watching the Patriots from an open-air tiki bar win the Super Bowl;  here are some pictures: 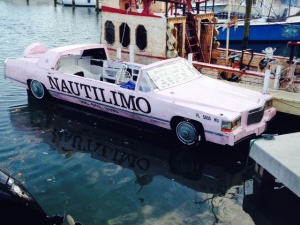 We’ve seen all sorts of vessels on this trip, but this one was quite unique – 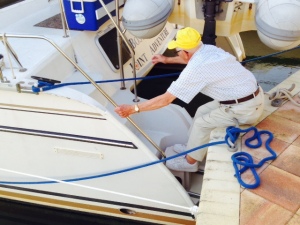 Most marinas have finger piers that make it easy to get on and off the boat. Not so at our dockage at Islamorada, with a fixed dock. Because the dinghy hangs on davits and extends past the back of the boat, it becomes difficult to get on and off in this dockage configuration. Not a problem for my Dad, however!

The first order of business on our fishing trip was to catch live bait, which our guide Frank caught with a net. 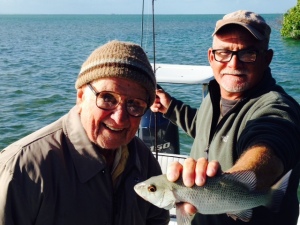 YESSS!! We caught mostly Mangrove Snapper, which are not large but are good eating – we caught about a dozen and a half, ranging in size from the legal limit of 8″ to about a foot. 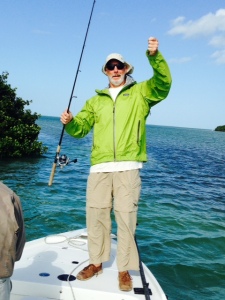 This is Paul, holding up the one that got away… 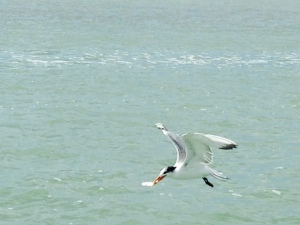 Incredibly, this is a bird picking a live baitfish right off the hook IN THE AIR AS IT WAS BEING CAST!  These birds are incredibly fast, accurate, and persistent in their pursuit of food.

This bird, now in the water, and 2 others during our trip got hooked while trying to eat the baitfish off our hook – one got hooked in the air and the others dove on the baitfish moments after it hit the water. Frank reeled in all three birds and was able to remove the hook without the birds being hurt.

A pelican catching the fish carcass being thrown into the water next to the fish cleaning station. 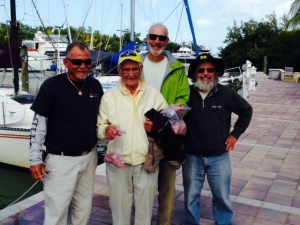 Our next stop was Key Largo after a run of about 30 miles in sunny, 80 degree weather. We’re back in the Intracoastal Waterway on the Gulf side, which is more protected from east and south winds than the Hawk Channel on the Atlantic side. Here are some images from our stay in Key Largo:

Another strange looking boat, this one in Key Largo 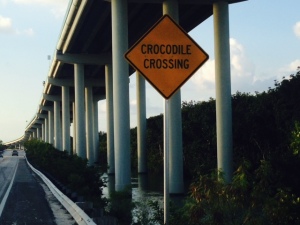 Toto, I’ve a feeling we’re not in Kansas anymore….

Hardcore movie buffs may recognize this boat. Hint: if you look closely, you might see Humphrey Bogart or Lauren Bacall on the boat. Yes, it is the African Queen! It was built in England in 1912 and was shipped to the Congo where it was used as a supply transportation boat on the Congo River. The film producers purchased the boat for use in the movie. Afterwards, it ended up in the US and fell into disrepair until it was purchased in 1982 and refurbished. When the owner’s health failed, it again languished and deteriorated until a local Key West couple leased it and spent $90,000 repairing it. It is now listed on the National Register of Historic Places. The African Queen now goes out several times a day for 1 1/2 hour tours. My Dad being a movie buff, we of course had to go! 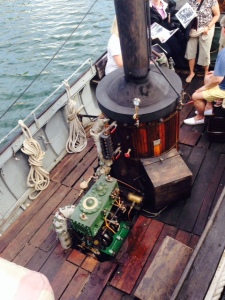 The African Queen is still steam powered – the steam boiler is in the center of the boat, and the steam engine is behind it, the workings fully exposed.

Our next stop will be Miami!

2 thoughts on “THE RAILROAD THAT DIED AT SEA”