Talk about culture shock! For nearly a month we have been traveling along the Everglades, a deserted anchorage, the Florida Keys – often rural and rustic, always laid back and unhurried – “island time”.  Suddenly we’re docked in downtown Miami – highrises tower over the waterfront and everywhere there is hustle and bustle.  Not complaining, mind you, for Miami is a great and fun city – but things sure did change in a hurry!

Our 50 mile run from Key Largo was quite pleasant, and seeing the Miami skyline rise and grow on the horizon was very exciting:

The City of Miami skyline, approaching from the south in Biscayne Bay –

As we approached Key Biscayne, we saw some houses standing by themselves out in the ocean, built on stilts. We decided to explore, and wound our way through a cluster of seven such houses, known as Stiltsville, with quite an interesting story. The first such house was apparently built in the early 30’s during Prohibition by a character named “Crawfish” Eddie as a gambling house, since gambling was legal at that time a mile or more offshore. He allegedly sold bait, beer, and crawfish chowder, the latter of which he made from crawfish he caught underneath his shack. Eddie’s fishing buddies and others constructed shacks on stilts as well in subsequent years, followed by the construction of several social and fishing clubs – all on stilts over a mile from land and accessible only by boat. In a February, 1941 issue, LIFE magazine featured an article about one such club, describing the Quarterdeck, an exclusive membership only club as a “…$100,000 play-palace equipped with bar, lounge, bridge deck, and dining room, …an extraordinary American community dedicated solely to sunlight, salt water, and the well-being of the human spirit.” At its peak in 1960, there were 27 structures in Stiltsville, when Hurricane Donna severely damaged the Quarterdeck and most of the houses. Some were rebuilt, however, and in 1962 a scam artist named Harry Church grounded a 150 foot yacht on the mudflats of Stitltsville and turned it into a social club called the Bikini Club in which drinks were free to women wearing bikinis, and which featured a sundeck for nude sunbathing and staterooms that could be rented, presumably by the hour. A few years later, the Florida Beverage Commission raided the Bikini Club and closed it down for selling liquor without a license. However, Hurricane Betsy in 1965, effectively destroyed the Bikini Club and again severely damaged most of the existing structures. Following Betsy, Florida decided to assert jurisdiction over Stitltsville, requiring lease payments, refusing to issue new Building Permits, and refusing to allow any structure which sustained more than 50% damage to be rebuilt. The leases expired in 1999 and required the owners to remove the structures at that time at the owners’ expense. However, in 1980, Congress expanded Biscayne National Park to include Stiltsville, so the United States Park Service now had control but agreed to honor the existing leases. Hurricane Andrew destroyed half of the 14 remaining structures in 1992, leaving just seven. As the 1999 deadline approached, the owners and several preservation groups attempted to list the remaining buildings on the National Register of Historic Places to keep them from being destroyed, but the applications were denied because the structures were not yet 50 years old. In 1998, 57 years after its first article, LIFE magazine featured another article about Stiltsville, this time describing the grassroots efforts to fight the federal government and save the buildings. Over 75,000 people signed a petition of support, and in 2000, the Park Service reversed its position and agreed to allow the houses to be preserved. Today the houses are vacant but are being maintained as the Park Service works with a non-profit Trust on a plan to preserve and utilize the remaining seven structures. Quite a story.

Here are some pictures of them: 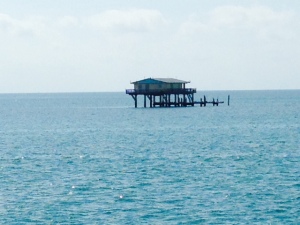 The stilt houses are built on a mud flat of shallow water more than a mile offshore, in the open ocean.

A more complex structure than the others

After meandering through Stiltsville, we ran along the coast of Biscayne Bay and ducked into an anchorage known as No Name Harbor adjacent to a state park: 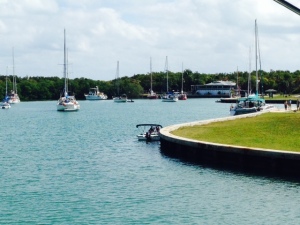 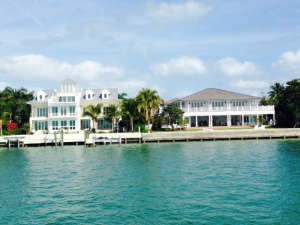 A couple of the spectacular houses in Key Biscayne overlooking the water. We looked for the ghost of Richard Nixon, but saw nothing…

A couple other houses in Key Biscayne –

The twin cities of Miami and Miami Beach are vibrant, diverse cities with an incredible combination of cultures. Our week-long stay coincided with the set-up for the Miami Boat Show, so dockage space was difficult to find and we stayed two days each in four different places, each a unique experience. The first was the Miami Municipal Marina, immediately downtown, surrounded by highrise buildings and the “Bayside” marketplace featuring restaurants, shops, live music on the street, etc. We took several tours of the city to acclimate ourselves,  Here are some images: 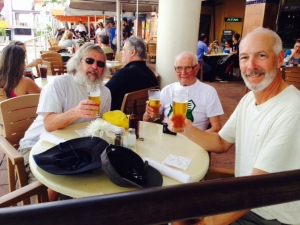 Celebrating our arrival in Miami at a waterfront pub 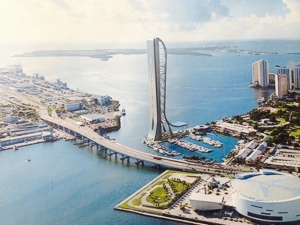 This is a picture of a rendering of the future – Miami is intending to build a 1000 foot tower to create an iconic image for the city – similar to the Needle in Seattle or the Arch in St. Louis. The marina where we docked the Joint Adventure for the first two days is in the foreground, and will remain when the tower is built. Construction is scheduled to start this Spring. The white dome in the bottom right is the American Airlines Arena where the Miami Heat play.

The original Miami Customs House, now called the Freedom Tower, is the building where the government processed the Cuban refugees which have come to America since Castro took control.  Cubans refer to it as the Cuban Ellis Island. For a time, it was the tallest building in Miami 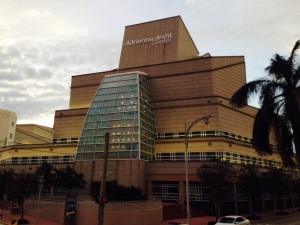 The Perez Art Museum at the waterfront in downtown Miami

The original Miami Customs House, now referred to as the Freedom Tower or the Cuban Ellis Island, served as the processing point for Cuban refugees entering the US after Castro seized control. For a time, it was the tallest building in Miami.

After two days in the Municipal Marina on the waterfront, all boats had to leave so they could set up for the Boat Show. We moved to a marina 1.5 miles up the Miami River. Here are some images: 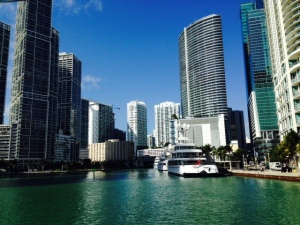 Entering the mouth of the Miami River from Miami Harbor

The Miami River, navigable for about 7 miles or so, cuts through the heart of the city with highrises on both sides and bridges every couple of blocks. While it serves recreational traffic, the river is a major commercial waterway as well – fishing boats utilize the river to offload their catch, freighters offload goods, and several commercial boatyards line the river. 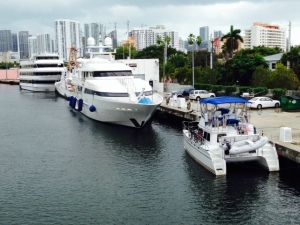 The Joint Adventure docked on the river – notice the boat in front of us – we complained that they let such rif-raf share dock space with us….

One of life’s strange coincidences – working with a Boston-based developer with whom we have worked closely for many years, Koningisor, Luciano, & Associates has done a fair amount of work in Miami – the building in the picture immediately across the river from where we are docked is a building in which we managed the permitting and oversaw the construction. There are three such buildings within sight from the bridge of the Joint Adventure at this dockage. Two more are currently underway.

Miami is an incredibly diverse city, characterized by many ethnic neighborhoods from various parts of the Carribean, Central America, and South America.  Of course, Cubans dominate, since nearly 700,000 Cubans have emigrated to America, the vast majority to Miami, over the past three decades or so. The Cuban culture is pervasive throughout the City, but no more so than in Little Havana:  Here are some pictures: 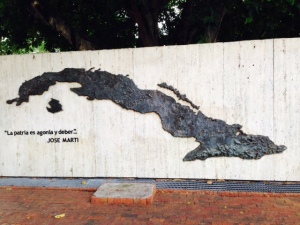 This is a monument to Cubans who lost their lives in the disastrous Bay of Pigs invasion in 1961. Older Cubans still fault America for the alleged failure to provide promised air support that was expected to help the overthrow of Castro to succeed. Most Cuban-Americans with whom I spoke supported Obama’s decision to move toward normalizing relations with Cuba, though all were quick to point out that many, especially older Cuban-Americans, were adamantly opposed.

In the heart of Little Havana is Domino Park, a place where Cuban Americans gather at permanent tables to play dominos, seven days a week. 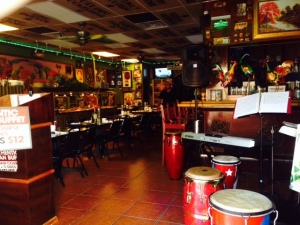 He reminded me of Kermit, so I couldn’t resist including a picture of him.

Now THIS is great architecture that I can relate to…

Another unique and fascinating ethnic neighborhood in Miami is called Overtown. As Miami developed in the first half of the 1900’s, blacks were segregated to an area west of the railroad tracks which was originally called “Colored Town”, now called Overtown. Within Overtown is the Wynwood Art District which features incredible murals painted on buildings and walls throughout the district. I’ve truly never seen anything like it on such a scale. Following are a number of photos of just a few of the murals. The artwork speaks for itself, so I have provided only a few captions:

This is a two-story high building – 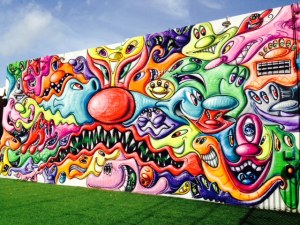 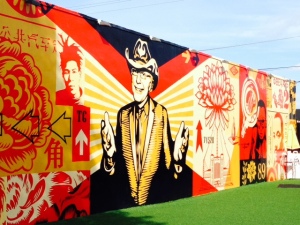 This is actually an entire wall of real flowers

From our dockage on the Miami River, we were fortunate to arrange for dockage for two nights at the Coral Reef Yacht Club in Coconut Grove, an upscale area on the south side of Miami. Here are some images:

Hank driving on our way to Coconut Grove

The Biltmore Hotel in Coral Gables was built in 1926 to cater to wealthy northerners during the winter months. The War Department took it over during World War 2 and converted it to a hospital, covering the original marble floors with government-issued linoleum. After the war, it was used as a VA hospital and campus of the University of Miami Medical School until 1968. After extensive renovations and restoration of its original finishes, it was again converted to a hotel, opening in 1987. It is on the National Register of Historic Places.

The interior of the Biltmore hotel is spectacular –

Built from 1914-1923 by James Deering, founder of International Harvester, the Vizcaya Museum and Gardens rivals the mansions of Newport. It was built to feel like a 1700’s Italian villa, and the gardens cover acres with plantings and coral walls, arches, and sculptures. 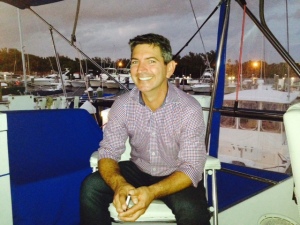 My friend and colleague from First Florida Builders, who built most of the apartment projects we worked on in Miami, was able to join us for a Happy Hour cocktail while we were in Coconut Grove

Our last stop in the Miami area was Miami Beach – built largely on fill over a mangrove swamp now some of the most expensive real estate in the country:

Much of the architecture in Miami Beach is art deco – Ocean Avenue is lined with restaurants, bars, and clubs. 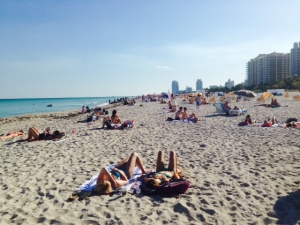 No description of Miami Beach would be complete without a picture of South Beach. Though it was a bit cool when I walked the beach, there were beautiful people galore – the beach lived up to its reputation.

From Miami, we begin to slowly work our way in a northerly direction, though we’re going to leave the boat for a little over a week at the end of February to visit home, shovel some snow, and do some skiing.

3 thoughts on “STILTSVILLE (AND MIAMI)”