OK, I admit it – as a group, we’re laundry-challenged.  It started when I couldn’t tell the difference between a washing machine and a dryer, put my newly washed clothes into another washer instead of a dryer, and was forced to sit through the entire washing cycle of the clothes that had just been washed.  But Pat outdid me when she dumped her load of clothes into the washer, forgetting that she had put a bottle of shampoo in her laundry bag. The bottle opened during the wash cycle – making the clothes VERY sudsy, requiring at least one re-wash.  Not to be outdone – on Friday morning, Wendy & Knif offered to wash all the towels on board before they left. However, they were not quite dry when Wendy & Knif were about to be picked up, so rather than hang them on the boat to dry, I asked that they start the dryer for one more cycle and I would get them in 20 minutes. Earlier this evening (Sunday), I couldn’t figure out where all our towels went. Luckily, the marina was filled with people who didn’t need towels, and they were still there – in the dryer!

So – for the past 7 weeks, every Saturday has been a transition day in a pre-chosen location somewhere between Kingston, Ontario and Muskegon, Michigan – one set of friends joined us while another set of friends left us. We usually had 6 people on board, and for one special week, we had eight. Almost all cruisers whom we’ve met along the way have 2 people on board – usually a couple – and most have boats larger than the Joint Adventure. Most cruisers think we’re crazy. Maybe we are. But the camaraderie, the laughs, and the shared adventure have been more than worth any inconvenience caused by scheduled rendezvous points, limited space, or group decision-making. It has been truly a great experience.  However, now that the summer is winding down, we’re about to enter the next phase of our voyage. Paul & I are alone again for the next week and a half as we make our way south along the last third of Lake Michigan, then spend time exploring Chicago. Tom – friend, neighbor, and co-owner of the Joint Adventure – and my Dad then join us in Chicago as we head down the inland rivers towards Mobile, Alabama.

In the meantime, back to our trip – we spent our “weather day” in Ludington, Michigan (about halfway down the eastern coast of Lake Michigan) catching up on chores and going to a movie in the afternoon – Get On Up – the story of James Brown. Very good movie – I recommend it. Here are a couple of final pictures from Ludington:

A late evening sunset over Ludington Harbor and Lake Michigan

Wednesday dawned cool, sunny, and calm, but we headed out early since the wind was predicted to increase as the day went on (it never did). Running along the coast in the early morning, we saw the most unusual formations of fog that I’ve ever seen – wisps of fog formed different patterns as they hung over the water intermittently.  It was hard to capture in pictures, but here’s one picture that did capture one of the fog formations:

This actually looks like a wave of water, but it is a fog formation a little ways from the shore

We next docked in Whitehall, Michigan, about 4 miles down White Lake, a small lake that empties into Lake Michigan. However, the more interesting town (though smaller) was Montague, just across the river from Whitehall. It is a funky town, and boasts the largest weather vane in the world. Here are some pictures: 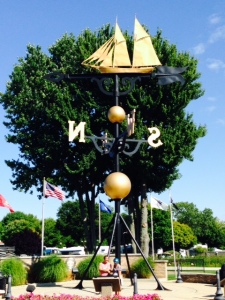 The largest weather vane in the world – who knew?

Montague also boasts the oldest continually-operated soda fountain in Michigan – selling milkshakes, etc. since 1878! Actually, it is a really cool place with a very friendly proprietor with great stories, who took over running it from her father who ran it since World War II. There are also historical displays of memorabilia, including the story and pictures of two local girls who were, for years, featured as the “Coke girls” in the old post-World War II signs and advertisements 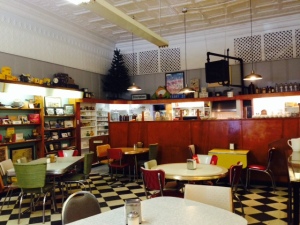 The room with the soda fountain also included a pharmacy in years past – the proprietor converted it to a restaurant, retaining the old pharmacy counter, seen at the rear, and the old merchandise shelving, seen on the left

We came upon another funky place – a book store/café/bar/performing stage all in one. They had live music scheduled for the evening, so we decided to come back at 7:00 and have dinner and drinks over live music while we celebrated Wendy’s birthday. The live music turned out to be an opera singer – quite good, but not exactly our first choice of music-type. So we politely slipped out after one drink when she took a break and had dinner and birthday cake elsewhere-

White Lake has had a troubled history – surrounded by industry in the early and mid 1900’s, including lumber mills, tanneries, and a Hooker Chemical plant, the lake was one of 43 lakes designated in 1987 as an Area of Concern – meaning it was dangerously polluted. As a result of nearly 30 years of concerted clean-up effort, the EPA just announced that it will be de-listed this fall – a real success story. The picture below shows a remnant of the industrial era – these are enormous barrels that were used in the tanneries. Hides were put in the barrels, which were then rotated as part of the process for softening the hides

Our next stop was Muskegon, Michigan, where I am now. Sadly, Trish, Wendy, and Knif all left the boat here. After spending the summer on the boat, Trish will be returning home and going back to work, since school starts in two weeks. I’ll miss her!

Muskegon is an interesting place. It is the largest city we’ve visited since Kingston, Ontario, and is obviously working hard to re-create itself after its old industrial base has been dismantled. A good portion of the downtown area was cleared via Urban Renewal in the 60’s, with nothing to replace it ( as sad story repeated in many cities across the country). Some old buildings were retained and some well-designed new ones have been built, but much of the land downtown remains vacant. The result is a downtown area with far too much open space between buildings and a glaring lack of people – even the relatively few restaurants and bars were nearly empty on Friday at lunch time and through the afternoon. However, it’s obvious that slow progress is being made, and there were a number of interesting museums, sights, and places to visit. Here are some pictures:

Muskegon is the birthplace of snowboarding – on Christmas Day, 1965, Sherman Poppen fastened two old wooden skis together and took his kids to slide down the snow-covered sand dunes – he called it snurfing. Just a year later, in 1966, Brunswick came out with the Snurfer – the first commercially-made snowboard, although the term “snowboard” didn’t come into vogue until the 1980’s. In the 1990’s, Sherman Poppen was officially designated as the “Grandfather of Snowboarding”, and Muskegon as the birthplace – the origin being sand dunes at the beach, not a ski mountain as one would expect

Muskegon has a large Performing Arts Center, and this sculpture is a tribute to film-making 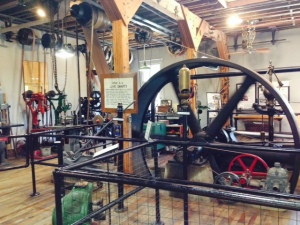 In addition to an impressive Museum of Art, Muskegon has several smaller museums with different themes. This display in the Heritage Museum is a working model of a steam-powered factory from the 1800’s. By the way, Lowell, Ma. has an amazing museum in which an entire textile factory, complete with weaving machines driven by an elaborate system of water-powered overhead belts shows what it was like to work in the incredibly noisy and cramped factories of the Industrial Revolution – well worth a visit

New industry trying to get a foothold – these are enormous windmill blades being loaded onto a freighter for shipment to a wind farm – not sure where. I was amazed at the incredible size of each blade! 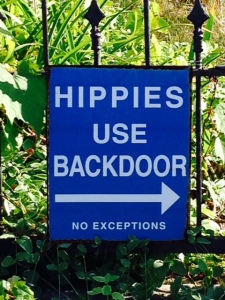 How did they know I was coming? Maybe I had better cut my hair….

Muskegon has a truly beautiful beach – very wide and perhaps a mile long, the sand is soft and fine, like all of the beaches we’ve encountered so far along Lake Michigan. The mouth to the harbor is protected by two long breakwaters and is marked with a 70′ high lighthouse

Inside the Muskegon breakwater – this looks like fun, but what happens if you lose your balance and the jets don’t turn off? 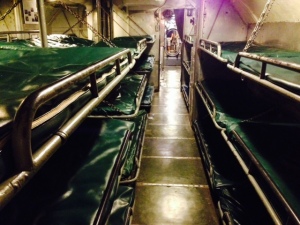 We’re having these bunks installed in the Joint Adventure so we can fit more people on board – actually, they’re bunks on the LST 393, a World War II landing ship that delivered tanks to beaches. It can hold 52 tanks, and delivered tanks to Italy, North Africa, and the beaches at Normandy

LST 393, which was a very interesting tour

In addition to LST 393, there is a World War II submarine – the USS Silversides – docked at the Veterans Museum near the beach in the Muskegon Harbor channel. The museum focuses on the role of submarines in World War II. Only 1.6% of the Navy vessels in WW II were submarines, but they sank 55% of the total number of enemy ships sunk during the war. The Silversides sank more than all but two other US subs, out of over 200 that were deployed in the war. However, the cost was very high – the mortality rate among sailors on submarines during the war was 22%, highest of any group in the Navy. Here are a couple of pictures of the USS Silversides:

The USS Silversides in Muskegon Harbor. The Museum focuses on the role of submarines in World War II, and provides guided tours of the sub 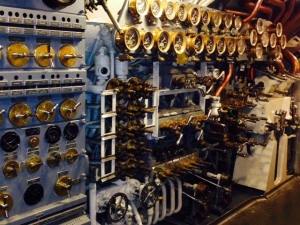 One of about 8 control panels inside the submarine

So tomorrow we continue our journey south towards Chicago.

One thought on “CHANGING OF THE GUARD”