So we stopped at a very local diner in a very small, very rural, very Illinois town. In typical Midwest fashion, the waitress was friendly and to-the-point. When she asked where we were from, we replied “Boston”. Not understanding why anyone from Boston would ever find themselves in this very small, very rural, very Illinois town, her immediate reaction revealed the only explanation she could imagine:  “You boys lost?”  Well, we weren’t lost, thanks to the linear flow of the river, but it speaks volumes about the remoteness of some of the terrain on the Illinois River through which we have been passing.   Scenic, much of it pristine with herons, eagles, and other wildlife, and much of it very rural. We are constantly reminded of civilization, however, with the periodic encounters with barges and tows plying the river, and the occasional presence along the way of small villages on the waterfront or old industrial plants, most of which were shuttered and abandoned long ago. All in all, floating down the river is a treat. Here are some images since my last post:

We left early (around 6:30 AM) because we decided to make a long run (100 miles) due to a weather system coming in the following day. Because of the chilly temperature, we ran into thick fog on the river a few miles downriver. It got so dense at times that we could see only one bank of the river and that one faded in and out of the fog – we had to navigate by radar until the sun rose and started to dissipate the fog

My Dad, concentrating on his chores as Navigator, with Tom in the background. This was taken early in the morning, so as you can see by the hat and gloves, it was chilly – actually, a welcome relief after a stretch of very hot weather most of the time since we reached Chicago

We came upon this tow that was perpendicular to the river, completely blocking passage. Apparently he was having difficulty because his barges were grounding in the mud. When we contacted him by radio, his first instructions to us were “Stay away!”. A short while later, another tow came upriver, so he had to unhook the tug from the barges and clear a path. After the other tow went through, he let us pass as well. The tows rule the river!

An old derelict replica paddlewheeler beached along the river. Janet, this is Doug’s next project – he told me you wouldn’t mind moving in while he renovated it

Our first stop after Peoria was the Tall Timbers Marina in the town of Havana, Ill. Although the town was somewhat run-down and obviously experiencing difficult times, the people were friendly and resilient. A weekend-long Octoberfest was underway, in which the whole town seemed to be taking part. We went to a local tavern for lunch and watched the Patriots play a dismal second half and lose to the Dolphins. However, the small marina was a treat – nestled in a small dug-out basin surrounded by trees, the entire marina was built on floats – the docks, the marina office, the small restaurant (which unfortunately was closed), the screened-in lounge, etc – all floated.  The owner told us:  “When the river goes up, we all go up. When the river goes down, we all go down”:

The Joint Adventure tied to the dock next to the floating buildings. Four other “loopers” were at the marina with us as well, some to the left of us in the picture

That evening, my Dad cooked dinner – we figured it was the first time he had ever cooked a complete dinner for four – a major milestone!

The next day, we did a 100 mile run due to forecasts of thunderstorms coming in the next day, and we wanted a secure and pleasant place to wait them out. We crossed a MAJOR milestone: 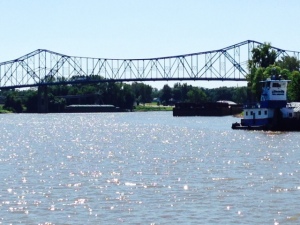 While not obvious in the picture, this bridge represents a major milestone on our journey – it is the western-most point on the Great Loop route – from here on, we gradually drift eastward as we continue south. YYAAAYY!!

Our next stop was in in the town of Hardin at a restaurant along the river with a dock where we could tie up for the night – places to tie up are becoming more and more scarce. Not everyplace we dock is beautiful – this was nothing more that a rusty steel dock with a precarious ramp, but it was a secure place to stay for the night along with quite good food in the adjacent restaurant. The town was small and very depressed.

The Joint Adventure tied to the old steel dock. Notice the end of the ramp at the bottom of the picture – the stump is the stepping-stone to get off the ramp 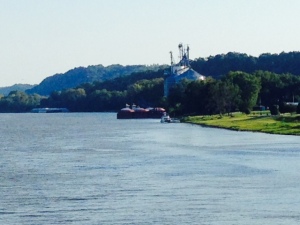 Taken from a bridge across the Illinois River, the Joint Adventure is tied to the dock in Hardin. Notice the barges tied to the shore just beyond the boat, and the industrial plant on shore near the barges

On Tuesday, another MAJOR milestone – we completed our run down the Illinois River, and merged onto our second Inland River on our journey south – the MISSISSIPPI!!  We stopped in Grafton, Missouri at the confluence of the Illinois and Mississippi Rivers – Missouri is our eighth state, in addition to two Canadian provinces.  The marina in Grafton, which had a novel approach for a work tug:

We’ve seen a wide variety of barges and tugboats along the way, but this was a novel combination of a working tug/barge – the marina in Grafton was using it to dredge their basin

The current in the Mississippi is noticeably swifter than on the Illinois, and the river is wider. There is also more debris floating down the river, mostly sticks, small logs, and small branches. There was a massive thunderstorm Tuesday night, and we planned to stay in Grafton for another day due to more thunderstorms forecast for Wednesday. After monsoon rains in the morning, the weather cleared a bit. However, a more important issue arose – as you may have read, there have been huge rainstorms throughout the Midwest – Kansas City reportedly received 9″ of rain. Though many of these rainstorms are hundreds of miles away, the water all drains into the Missouri/Mississippi watershed, affecting the water levels and currents all the way to the Gulf. We’re in the process of trying to assess the impact on us. In the meantime, we decided to make a mad dash from Grafton, Missouri to Alton, Illinois (other side of the river, about 20 miles downstream) before the next wave of thunderstorms hit to be closer to St. Louis and be at a marina with better facilities. An hour after we arrived, a massive thunderstorm hit, with high winds, more monsoon rains, and lightning. However, we were safely tied up with our docklines doubled, sitting on the bridge having a beer.

We’re now in the process of determining the affect of the water levels on the next leg of our journey.

5 thoughts on “YOU BOYS LOST?”